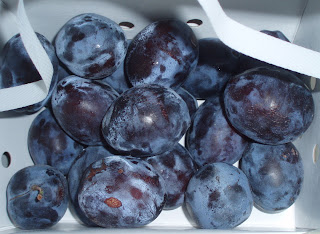 Place flour, sugar, baking powder, salt and nutmeg in large bowl and mix thoroughly together. Put milk, oil, and egg into a measuring cup and whisk together with a fork. Pour the liquid into the dry ingredients, stir to blend, and then stir 100 times with a large spoon such as a wooden spoon. 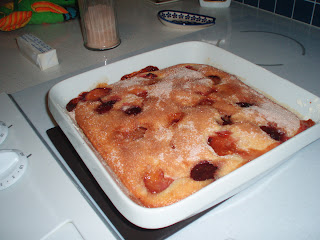 Pour the batter into the pan, and bake at 350 degrees for 10 minutes. After the 10 minutes of baking, remove cake from oven only long enough to arrange fruit on top, sprinkle with more cinnamon-sugar, and dot with butter. Bake for another 40 minutes, until golden brown. You can optionally sprinkle more cinnamon-sugar on the cake half way through the 40 minutes of further baking.

Some of the plums will sink into the batter, others will remain visible.
Posted by Mae Travels at 8:23 PM