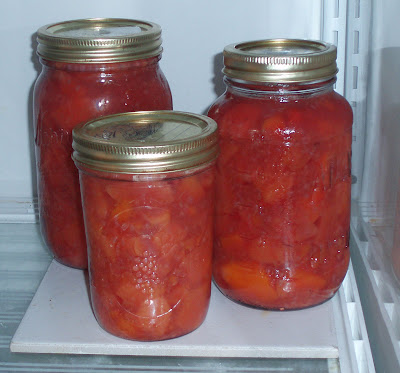 Peaches are in season. Last weekend I bought a very large basket of peaches and a very small basket of raspberries. Blue plums hadn't yet come in around here, or I would have tried for a big basket of them too. That farmers' market trip also provided the ingredients for ratatouille and grilled peppers in vinaigrette sauce.

Almost as soon as I got home last Saturday I peeled the peaches, washed the raspberries, and made compote. I had 2 mangoes and a few other non-local fruits to add. The raspberries cooked down into a lovely background for the yellow fruit slices. Sugar and a bit of lemon, some vanilla at the end: it's compote.

We have eaten it several times. Last night I served it as a sauce for ice cream. "What's this fruit sauce?" asked one guest. Another asked if it didn't sometimes have raisins in it? His grandmother made it with raisins, cinnamon, and cloves. I explained with the story I tell all the time: if made in August, compote has peaches; in September, peaches and plums; in October, apples; in winter and spring (especially at Passover), prunes, raisins and other dried fruit; in early summer, rhubarb and strawberries. Spice? I follow my mood. This time only vanilla.

I'm glad that I still have three of the jars in my refrigerator. I think I made six or seven of them -- it goes fast.
Posted by Mae Travels at 2:02 PM

Mae, what a great idea, to combine the fruit before canning it! Usually we do one fruit per batch, and then concoct things afterwards. Now I'll be sure to put some compote up this season, too.