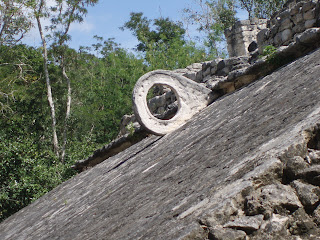 The Europeans who first encountered Maya people with rubber balls were amazed -- they had never seen a bounce! The sacred ball game played on the ceremonial courts involved a rubber ball that was tossed through a large stone ring. (Above: one of the courts at Coba that we visited last week.) At the end of the game, the captain of one of the teams became a human sacrifice -- some say the winner had this honor, some say the loser.

At least four agricultural products come directly from the Maya: rubber, chocolate, vanilla, and chicle -- the original basis of chewing gum. These products were native to the jungles in what is now Guatemala and Honduras where their civilization began.

Trade in cocoa sustained the economy of many of their cities, and cocoa beans were even used as a medium of exchange. They were so valuable that archaeologists have found counterfeit cocoa beans made of clay to look just like the real thing. Mayan gods, kings, and warriors drank a foamed cocoa beverage, flavored with a variety of things including peppers -- but not sweetened. Chocolate dates to the pre-Maya Olmec civilizations of the area. The earliest proof: chemical analysis revealed chocolate residue in a Maya spouted vessel dating to 2600 years ago. Oddly, today Mexico no longer is a major producer of cocoa beans.*

The Maya abandoned many of their big cities several hundred years before first contact with Europeans. Some combination of drought, overpopulation, wars, and loss of confidence in the increasingly repressive theocracy caused this abandonment. Monuments, ball courts, and paved roads reverted to overgrown jungle. Nevertheless, the Maya continued to cultivate and use their remarkable crops as well as corn, beans, squash, peppers, avocados, turkeys, and perhaps dogs -- products whose cultivation began elsewhere in the New World. They hunted or trapped fish, iguanas, lizards, snakes, birds, small monkies, and the peccary. The latter is a wild piglike animal that ranges from the southwestern US down through Central America -- the picture shows an ancient pot with a Mayan god, Itzamnaaj, riding on a peccary. 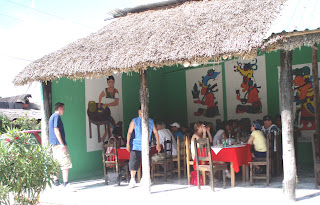 In native restaurants, like the one we ate in last week, the local cuisine incorporates old-world products -- beef, cheese, chicken, pork, rice, wheat, cane sugar -- with the new. 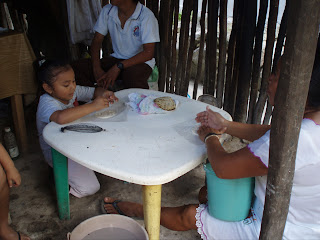 Tortillas made from corn have been a staple of the local diet for millenia. The photo shows a Mayan mother and daughter forming tortillas in the outdoor kitchen of their home, which we visited. They cooked them on an open fire. 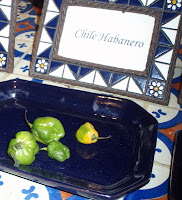 Maya sauces combine habanero peppers -- hottest of all peppers -- with other peppers, tomatoes, and spices. For tourists they seem to omit the habanero and the sauce is rather bland. I'm not sure if the ancient Maya also had the other famous new-world foods: potatoes and tomatoes.

Mayans love to eat raw habaneros, even for breakfast. The hot chile, along with chocolate, was a food for the ancient Maya gods -- sometimes in the same beverage. Habanero is considered the signature taste of the Maya people today. "If I don't have an habanero I may not eat" was the remark of one Maya.* 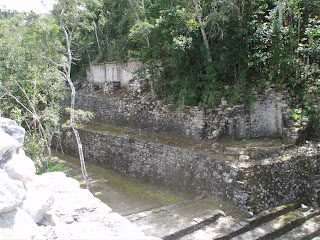 Chicleros are modern gatherers of chicle, the sap of the tree that still goes into some brands of chewing gum (though synthetics have mostly replaced it). These forest explorers know every bit of their territory, and in the past, they often helped identify the location of ancient cities covered with jungle growth. In Coba, we walked past piles of dressed stones covered with vines and trees -- trees even grow in the monuments that have been restored, as illustrated above. Our guide pointed out various trees, but not rubber or chicle trees (sapodilla family). They probably grow in the denser jungle of the south, not in the drier limestone soil of the Yucatan.

Unfortunately chicleros also have also cooperated with looters, who compete with archaeologists for access to unexplored tombs and ruins. Archaeologists want to dig in undisturbed sites in order to establish chronology and context. Looters want to dig first to obtain the pottery, the carvings, and the jewels buried with the ancient kings -- they know both the untamed jungle and the unchecked black market for the art work.