Charoses is one of the ritual foods for Passover -- as shown on this photo of last year's Seder plate. It represents the mortar the Jewish slaves in Egypt used to build the pyramids. Every Jewish cook uses a slightly different recipe. In every country and region, Jews have used the locally available ingredients in these recipes. In Egypt and the middle east, dates, almonds, and raisins made a mortar-like paste. In Eastern Europe, grated apples and honey combined with nuts for a very different taste, same symbolism.

My mother made charoses with grated apples, sweet wine, walnuts or almonds, honey, and lemon juice. I don't think she had a recipe or even a consistent ratio of ingredients. 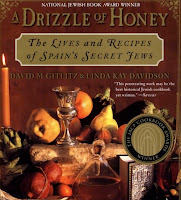 I've tried lots of other recipes, including the Marrano Jews' recipe in the book A Drizzle of Honey. This fascinating book reconstructs recipes for Spanish-Jewish and Marrano Jewish dishes based on the testimony of victims of the Spanish Inquisition. 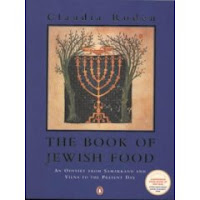 Several Charoses recipes appear in Claudia Roden's Book of Jewish Food. Wherever you have your Seder: I encourage you to try a new charoses recipe along with your old one!
Posted by Mae Travels at 4:35 PM