The Giant Pumpkins of Burns Park 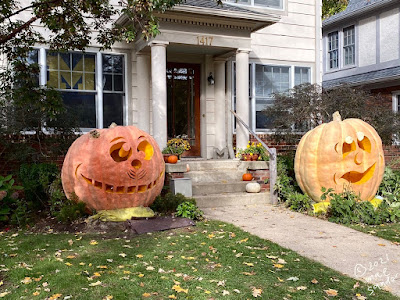 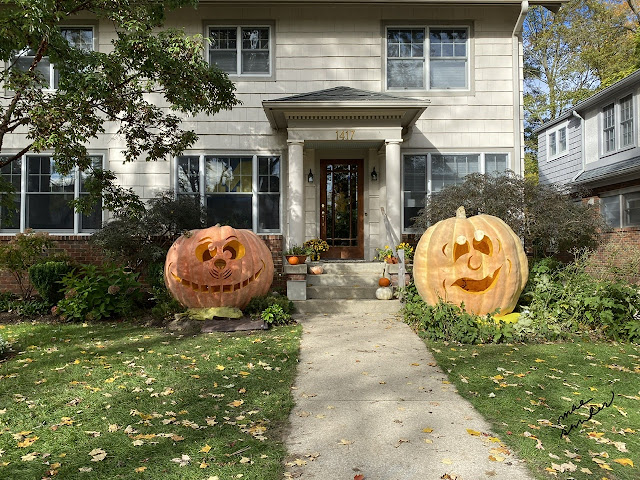 The Giant Pumpkins of Past Halloweens

UPDATE: Several people asked questions about these pumpkins. Here are my answers:

A Few More Halloween Decorations around the Neighborhood 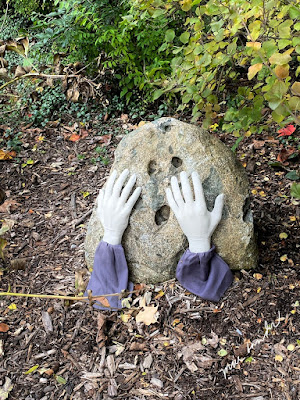 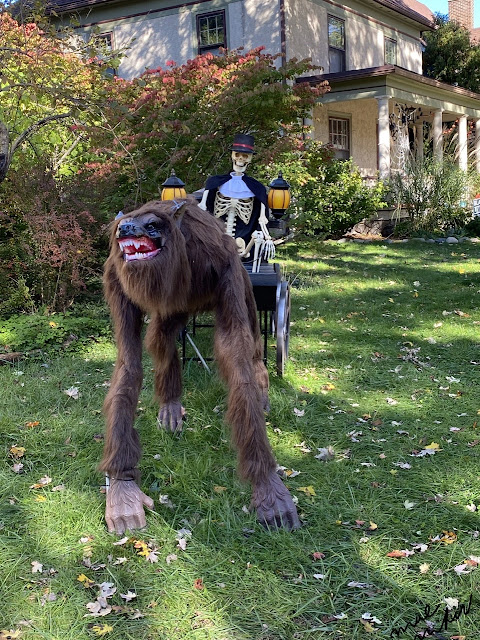 I’ve never seen a pumpkin this large. Impressive. I love the walk around your neighborhood!

How does he remove the pumpkins?

Wow. Those pumpkins are amazing Mae. I bet they are hard to carve, but they came out fantastic. Thanks for sharing. Happy start to your weekend.

Are those pumpkins edible? And I love the rock with the arms.

More information:
The giant pumpkins are delivered on a flatbed truck, and handled with a fork lift. They are removed the same way, usually a day or so after Halloween. Remember, they weigh more than half-a-ton!

The pumpkins are carved by a carpenter using some amazing wood-carving tools. The entire process is amazing.

Some pumpkins, including these giant pumpkins, are cultivated for their use as jack-o-lanterns and decorations. They are not the same type as cooking pumpkins, which are typically quite small. Decorative pumpkins like these wouldn't poison you if you ate them, but the flesh is woody and they don't make good pies or other foods.

Halloween decorations can be so much fun and some people really go all out. The super huge pumpkin idea is unique- never seen that before but I love it - Thanks for sharing it.

I have a friend who used to grow large pumpkins like that. I need to call him because I haven't seen him in two years. So glad you shared these because it reminded me of him and his amazing pumpkins, too. I like how your neighbors seem to go all out for the children in that area. I especially like the three witches.

Oh my goodness, at first I thought those were fake pumpkins! So cool.

Wow! What a fun tradition. I appreciated the further information you provided about the delivery. That's what I was wondering right away - How do you even get one of those to your house. I am not a huge fan of Halloween decor, but I love pumpkins. Thanks for sharing these pictures.

How fascinating. I had no idea that pumpkins grew this big. What a fun tradition to have in your own neighborhood. Thank you for explaining how all of this comes about...I was very curious to know this.

What fun! I figured there had to some sort of fork lift involved to move those pumpkins around. Happy Halloween!

What a cool neighborhood! I would totally look forward to seeing all the houses and yards decorated and the giant pumpkins every year!

Wow! Those pumpkins are huge!! We don't celebrate Halloween here in SA, so now decorations or trick or treat or dress-up. We did have a fun day at school on Friday though where all the kids and staff dressed up as their favorite bookish characters. Was lots of fun!

Have a good week and happy halloween!

"BIG" WOW. Oh, such fun!
And they look so friendly, amazing work, and all the other... great place where you live. One neighbor put a carved pumpkin on his bike, that was all I saw as decoration.

Those are really big pumpkins. Check out my Sunday Salon post at Girl Who Reads.