"The Gourmands' Way" by Justin Spring 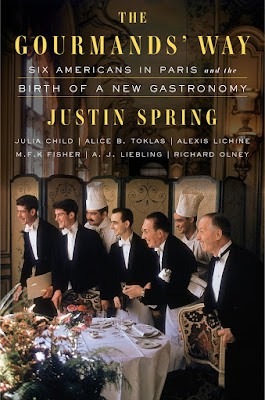 The title of this book could be "Spring Cleaning." The author, Justin Spring, takes a fresh, and not always flattering look at six famous American writers that he says contributed to the idealized image of French food and wine in much of American intellectual and gourmet life. Spring concentrates on the post-war years, approximately 1945-1975, with bits of background and followup -- a wonderful era in France, and an interesting time for the development of American taste in food, especially French food.

Although I was already very familiar with the lives and works of four of Spring's subjects, and moderately aware of the other two, I learned something -- usually a lot of things -- about all of them from Spring's book. His research into their lives, their publications, and the history of their time in France is incredible. I very much liked his narrative style: he doesn't separate the discussion of the six, but treats their experiences as a continuing history and describes their relationships to one another and common approaches to food and to French life. In the course of the book, Spring also provides lots of information about a vast number of other books and personalities, both French and American, which I equally enjoyed.

Ruth Reichl, in her New York Times review titled "Iconic Food Writers Toppled Off Their Pedestals" took this view of the book --


"Spring sets out to prove that the six writers he chronicles — Julia Child, M. F. K. Fisher, Alexis Lichine, A. J. Liebling, Richard Olney and Alice B. Toklas — were responsible for making 'the age-old French dialogue surrounding food, wine and the table' part of the American dialogue. I’m not convinced he’s done that, but he has achieved something much more interesting: offered us an entirely new perspective on a group of people we thought we knew."

Instead of writing a review here, I'm going to show a photo of my own books by five of these authors and tell you one or two new things I learned about each one. I do not own any works by Alexis Lichine, and virtually everything about him was new to me.

Although I have his cookbook, Simple French Food, I was very little acquainted with author Richard Olney, and Spring's detailed and highly admiring portrait was enjoyable to read. I was particularly interested to learn about Olney's relationship with a number of other American ex-pats in Paris and France in the fifties and sixties, especially his friendship with James Baldwin. I also was unaware that Olney had written in French for the magazine Cuisine et Vins de France, a publication that I used to read (though after his tenure there).

While I knew much of the life story of Julia and Paul Child, I was very interested in Spring's detailed treatment of their restaurant-going in Paris:


"Apart from Michaud, which became their local favorite, the Childs began following the Parisian custom of visiting particular restaurants for particular dishes. Having been stunned shortly after disembarking the transatlantic liner by the sole meunière at the restaurant La Couronne in Rouen...she was delighted to discover that La Couronne had a sister restaurant in Paris, La Truite... serving the same seafood just as beautifully. ...

"The Childs also liked the poulet gratiné at Au Gourmet; the tripe at Pharamond; the snails at L'Escargot d'Or; and the onion soup -- de rigueur after a late night visit to Les Halles -- at Au Pied de Cochon. For choucroute they went, of course, to Brasserie Lipp ... On special occasions, they went to Prunier, so famous for its fish, or to Lapérouse, the ancient and celebrated restaurant on the quai des Grands Augustins. Still, it was the intimate Le Grand Véfour, with its unbelievably elegant neoclassical interiors fronting the gardens of the Palais-Royal, that quickly became their favorite...." (p. 92-93)

Spring explains that Julia Child had a substantial inheritance that enabled them to dine out and generally live well beyond the means that Paul's salary as an American government employee would have covered.

Just a note about money: Spring is fascinated by it! For example, virtually every bottle of wine mentioned in the text is footnoted with its price at the time of its purchase, along with the price one would have to pay at the time he wrote the book in around 2016.


Between Meals: An Appetite for Paris was one of the first food books that I read, a long time ago, and I knew little else about Liebling except that he wrote about boxing for the New Yorker. Spring's Chapter One opens thus "When the Allied forces entered Paris on August 25, 1944, war correspondent A.J. Liebling (or 'Joe') was right there with them." (p. 7). Spring's account of the liberation of Paris from Liebling's point of view was a great beginning.

Rather than the more popular books by M.F.K. Fisher, Spring concentrates on her disastrous endeavor to write the first of the Time-Life food books, which was supposed to be about Provincial French cuisine. Spring is incredibly dismissive of Fisher, whom he calls a liar on more than one occasion, and whose writing he clearly despises. He gleefully quotes a set of highly negative and pretty snarky footnotes by a French author (and food snob; excuse me, food expert) that were somehow added into the French edition of the Time-Life book. The notes constantly contradict Fisher's text; usually they were right, but it's somehow underhanded to have this be Spring's main discussion of her work.

"I Love You Alice B. Toklas" was a pretty forgettable film with Peter Sellers, except that in 1968 the hashish brownies that Sellers' character eats were beyond transgressive. And the recipe came from The Alice B. Toklas Cookbook, probably from a paperback that looked like mine, which dates to 1960. I was pretty familiar with the way Toklas's book impressed the American public (especially the hippies), but I didn't realize that she copied all of the famous words about the brownies from the letter and recipe contributed by her friend, beginning with the famous line "This is the food of paradise." (p. 273). According to Spring, Alice steadfastly claimed that she did not know that the exotic herb in the ingredient list was the famous intoxicant, and seriously illegal.

In Spring's Afterword, he underscores his principal claim about his subjects: "While none of these six writers invented French cooking, and while none could be called a definitive authority on the subject, each did his or her readers an extraordinary service by introducing them to the genius of French gastronomy." (p. 381)

The Gourmand's Way is a deep and rich history, very much worth reading. It will be the selection for the next meeting of my culinary reading group. It's also very appropriate for the ongoing blog event "Paris in July" hosted by Tamara. I especially want to encourage my fellow bloggers who love France and love Paris to read Spring or to read any of the other authors he discusses -- I hope to go back to some of these authors and read more of their work/try more of their recipes! After all these years, you know, hashish fudge is finally legal in many states.

All content in this post is written and copyright 2019 by Mae E. Sander for maefood dot blogspot dot com. If you are reading this at another blog, it's been stolen.
Posted by Mae Travels at 8:52 PM

This sounds like a really fun book and interesting for those of us who enjoy food in general and French in particular!

What a great collection of Cook books. I do love trying out new recipes.
Thanks for sharing, great post. I appreciate your visit and comment on my blog. Have a happy day and a great weekend.

Very interesting read Mae. I especially enjoyed reading about Alice B. Toklas ! A legendary name who I knew nothing about!

It sounds like an interesting read for sure even if unfair to M.F.K. Fisher.

Sounds like a good interesting read to me! All the books sound interesting, I've read a couple of them and need to check the others out.

I really enjoyed the format of your post. Your clever use of photos from your cookbook collection and tidbits about the authors was terrific.

Mae - I found a book I'd like to hear your thoughts on - I was watching Haute Cuisine last night, about the French Presidents personal chef. The President mentioned that he loved recipe books (I thought of you) and his personal favourite was In Praise of French Cuisine by Nignon. Do you know it?

@Tamara -- I had never heard of this book, which was published over 100 years ago. It seems pretty obscure, but I am downloading a facsimile from the French National Library. I'll let you know when I look into it.

@Tamara -- I think I was looking at another of his books. The correct one is Eloges de la cuisine française : 600 recettes prestigieuses (French) Paperback – March 18, 2014
by Edouard Nignon -- I don't think there's a copy for download, but it's sold on amazon.com. Also I don't think there's a translation. Nignon does have a Wikipedia page.

i think i have the alice b. toklas cookbook somewhere. i have made a wonderful chocolate pot from it. but it nearly killed my blender 'cos you have to blend the mixture for about ten minutes! cheers sherry

I loved the gossipy bits in this book.

Greg gave Rick this book for his birthday right before Dalmac. I brought it to the lake so he can read it when he gets here Monday. I'm not as fast a reader as you are and I'm pretty sure I can't finish it by then, especially if I do anything else (like art!) while I'm here. But I'm in it a bit and so far I'm really enjoying it. I like his style, too!