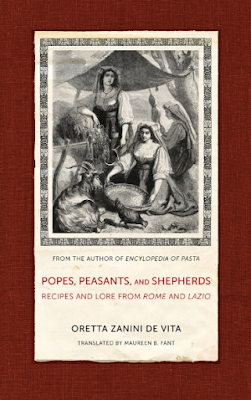 "The region of Lazio is a mosaic invented on paper between 1860 and the 1930s," begins Ernesto di Reno in his introduction to Popes, Peasants, and Shepherds: Recipes and Lore from Rome and Lazio by Oretta Zanini de Vita. "With the exception of the Rome metropolitan area, Lazio has always had a markedly rural identity." In this interesting book, the author presents a very complete history of the food of this once rather fragmented region near Rome, even including bits of information about the Etruscans, and lots about the ancient, medieval, and present Romans. Maureen B. Fant is credited as the translator, but she worked with the author to expand the original text, creating an English version that is a somewhat different book than that published in Italian.

Popes, Peasants, and Shepherds begins with a description of the region as it was in Roman times, and describes various local traditions and food ways. We learn about fishing in the Tiber River, about water mills in the river, and about the delivery of water for the city. Outside the urban area, sheep and shepherds were common from early times, along with many other types of agriculture. Separate traditional styles contributed to the cuisine of Rome such as the cuisine of Jews, who from antiquity lived in what became the Roman Ghetto; the cuisine served to the Pope and the large number of priests who lived and worked in the Papal court; and some of the separately-identified cuisines of surrounding localities. Obviously, all relied to a large extent on local produce, as well as imports from the Empire.

From the time of the ancient Romans, both land and water mills provided grain for wheat bread as we know it today, for flatbread made from barley, spelt or millet; and for pasta. Ready-made pasta in numerous shapes, according to the author, has been around "for centuries" but spread when industrial machines made it cheap to make. Pasta was consumed almost daily in soup. And pasta with pecorino cheese, fried pork fat, and perhaps garlic, onions, or herbs was common before tomato products became available towards the end of the 1700s.

I was fascinated about the water mills that supplied the grain for bread and pasta. In the dark ages, after the Goths besieged the city in 537, the water through the aqueducts was cut off:


"In addition to depriving  the people of water, that action brought a halt to all the city's mills. But General Belisarius, in charge of defending the city, had the brilliant idea of mounting mills between pairs of boats anchored to the banks of the Tiber, alongside the Tiber Island, where the current was fastest. For many centuries to come, mills on the Tiber were to be an integral part of the Roman landscape. They proliferated until, by the eighteenth century, they posed real impediments to river traffic, but they remained in use until the end of the nineteenth century....

"The mills were anchored to a masonry pylon attached to the riverbank. The pylon also served as a sort of escalator by which to reach the mill, and its resilience helped absorb the movements of the mill when the river was  high. The mill proper was contained in a wooden house atop a large boat anchored with ropes and chains. Between the large boat and the smaller one next to it were the wheels that propelled the mills by their movement in the water. ... It was not rare ... for the fury of the floodwaters to rip the fragile boats from their moorings..." (p. 19-20)

The author continues with details about the regulations applied to the mills and their owners, about the millers' guild established in 1496, and about the guild of the bakers, founded around the same time, who obtained their flour from the mills. Bread, of course, was one of the most important foods of the city throughout this time, with bread-based dishes that were then humble but as the author points out, are now trendy: examples are panzanella, pancotto, and "the now ubiquitous bruschetta." (p. 21)

The chapter on grain and milling is only one example of course, out of a vast wealth of fascinating detail in Popes, Peasants, and Shepherds. So many traditional ingredients --  why did I never realize that Romaine lettuce was from Rome? After around 100 pages of narrative the book continues with recipes. I don't think I will try these recipes, though I find them interesting to read. The reason is that the author and translator make it clear that local ingredients are essential, and often say that substituting other materials will mean that you aren't actually making this recipe.
Posted by Mae Travels at 7:32 AM

I *think* I knew at one time that romaine lettuce originated in Rome, but if so, I completely forgot that. Neat fact. And this sounds like a terrific book -- so much history. The part about the mills is fascinating. Thanks. And Happy Holidays!