Passover: Too Many Recipes?

"Why is this night different from all other nights?" is the first question of the traditional four questions that the youngest child at the Seder is supposed to read. The questions inform the ritual telling of the Passover story -- the main event at the Seder. When I think about the menus for our Seders over the years, I'm tempted to substitute the following answer:


"On all other nights we eat one main course with a vegetable and maybe dessert. On a few nights we have an appetizer. On this night we start by eating several items from the traditional Seder plate: matzo, horseradish, greens, charoset (a fruit paste). Then we serve matzo ball soup, then gefilte fish, then a main course like chicken with a traditional side dish like tzimmis. Finally, we have three or four desserts like Passover cake, macaroons, and several types of candy."

Like many American secular Jews, our family usually has a Seder on the first night of the holiday. And that's it. We might or might not eat matzo during the remaining days of the holiday. We don't give up bread or anything else. One ritual meal and we go back to normal.

In contrast, religious Jews have two Seders. Their holiday lasts for 8 days. Throughout these 8 days, they eat only matzo -- that is, unleavened bread -- and avoid all leavened bread, pastry, or other product that contains yeast, even beer. They rid their homes and pantries of every trace of leavened products, and observe many rules that limit their diet for the entire 8 days. Among the various sects of Jewish practice, the details of these rules vary, but the prohibition on leavened food is constant.

Historically, Jewish communities in Eastern Europe relied on bread as the main source of nutrition in their diet, so the holiday was a real hardship. The abundance of life in America and modern life elsewhere in the world changed this into a challenge for eating well without using leavening or leavened ingredients.

Passover is a time of family gathering and celebration, so many unleavened cakes and other sweets have been devised over several generations, as well as other foods such as gefilte fish, eaten on the Sabbath and many Jewish holidays. The number of recipes for Passover foods is enormous. The number of rules for what is allowed and what is forbidden, created over many centuries, is also enormous.

A huge number of Passover foods are also available ready-made. Markets with Jewish clientele stock products from several Kosher manufacturers that follow the rules with great cunning, so you can eat many types of food that you wouldn't expect to find. For example, the Barton company, in the 1950s, developed a line of candy that was accepted for Passover. Beginning in 1888, the Manischewitz company supplied Kosher products to American Jews. Starting with traditional matzos, matzo meal, and wine, they also developed cereal, pizza mix, noodles, over a dozen varieties of gefilte fish, and many types of macaroons. We definitely ate these products when I was a child!

With this huge range of beloved choices, our Seder menu is overwhelming! You might point out that we could do like the more religious people and have two Seders, but I must remind you that this is a religious ritual, and we aren't really sufficiently religious to do it twice even to have more goodies. It's complicated -- but we really just want to do the one-night version, which in fact is also what was done in my childhood.

One of the big accomplishments of Passover cuisine is the flourless torte or cake, usually made with nuts such as almond flour. I've never really mastered this. Though it's delicious, I really think it's too heavy after all those other traditional foods.

This year, I'm trying something new: apple crisp, also called apple crumble, made with matzo meal instead of flour. I practiced it once (see photos), and the substitution worked. I'll probably make it for the Seder next week. You can find dozens of similar recipes online and probably in books, but here's one more recipe. 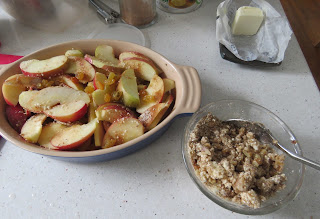 Cream the butter with the other ingredients to form crumbs.

Fruit Layer:
3 apples, sliced thin (use the kind of apples that stay firm when they are baked)
1 Tb matzo meal
handful of golden raisins
squeeze of lemon juice
cinnamon-sugar

Butter a small baking dish. Add the sliced apples to the dish and sprinkle them with lemon juice and cinnamon-sugar. Toss with the matzo meal and raisins.

Top fruit layer with an even layer of topping. Bake for 1/2 hour at 325º. Raise heat to 350º and bake for another 1/2 hour or until apples are softened and topping is browned. Serves 2 very generously. Serves 4 when there are many other desserts. Scale this up for a larger number of servings. Like any apple crisp, this can be garnished with ice cream, non-dairy ice cream, yogurt, Kefir, etc.
Posted by Mae Travels at 1:58 PM

Reminds me of my good friend while growing up in Louisville, when her family was preparing for Seder. The Apple Crisp looks delicious! BTW, I'm reading the "Cod" book, very informative entertaining read. It's very interesting, thanks for the mention! Take care

I'm going to send this link to my two cousins! They both only do one seder, I think and I bet they'd love the apple crisp recipe.

I cracked up when I read your description of how this night is different from the rest -- that would have been my answer too!

Enjoyed this interesting post. I made charoset for the first time last year when I reviewed a children's picture book about Passover. I enjoy learning as much as I can about Jewish cultural traditions. The symbolism of certain foods is fascinating. I have some matzo on hand, so might try the apple crisp!

I like the sound of that Apple Crisp, something light and fruity to follow a heavier meal. We usually have lamb for the occasion.

So interesting. Have a great week. Cheers from Carole's Chatter

I had no idea that there were so many Passover foods. I learned so much from reading your post and your apple crisp sounds amazing. Thanks so much for sharing this! :)

I found your post so interesting and informative, great job.