A long time ago, we lived in Berkeley, California. So long ago that the "Berkeley Food Revolution" hadn't happened yet, and there were only a few good restaurants. If you wanted good food, you crossed the Bay Bridge to San Francisco. In Berkeley, only two restaurants had a high reputation: Cruchon's and The Pot Luck, which the famous food critic Herb Cain called "the only San Francisco style restaurant in the East Bay." Both restaurants were a little pricy for us, but we managed to eat there occasionally.

Cruchon's, a short walk from where we lived, was known for a very large selection of pie. I particularly remember that they made a fudge pie, which was like a brownie in a pie crust, and several fruit pies. I think the pie selection varied each day, but there were always a lot of appealing choices. Maybe I first tasted pecan pie there.

Since today is Pi Day (because mathematics, you know, π = 3.14) I was thinking about Cruchon's pie, and looked it up. There's not much about it online -- I already knew Cruchon's was "a notable sandwich, salad, and pie restaurant near the Berkeley campus." However, I did discover that the founder of both Cruchon's and the Pot Luck was a man named Hank Rubin (1916-2011). According to his obituary, he was the "father of the Berkeley Food Revolution and a well-known writer about food and wine." (source)

Rubin's fascinating  obituary appeared in a journal called "The Volunteer" which was "Founded by the Veterans of the Abraham Lincoln Brigade." Rubin, I learned, "was a lifelong advocate for social justice — a passion that drove him to leave UCLA in his junior year as a pre-med student and enlist in the first major fight against fascism in Europe, the Spanish Civil War, where he fought with the Abraham Lincoln Brigade, a contingent of American volunteers." His Berkeley restaurants, founded in the early 1960s, "were the first restaurants in the Bay Area to be fully integrated by race and gender."

I remember only the pie and a vague image of what it looked like inside the restaurant. Funny that I can't find a single picture online. The only trace other than the obituaries is that The Berkeley Historical Plaque Project placed a plaque on the former site of Rubin's Pot Luck restaurant, and included a brief bio, which says:


"At Cruchon’s, where sandwich makers were visible to diners, Rubin was undeterred by a loss of customers, angry protests, and threats of a boycott in response to his employing a staff that was mixed by gender and race and included longhaired students." (link)

The Berkeley Plaque Project also quoted a recipe for the fudge pie:

“Melt together: 6 tablespoons butter; 3 oz bittersweet chocolate, mixing well, one and one half cups sugar, 3 med eggs moderately beaten; 1/2 tablespoon vanilla—turn into unbaked pie shell bake at 375 for one and one half hours, uneven…”

“Uneven” refers to keeping the oven door open part of the time. (link)

That's my Pi Day memory for this year! Here's what I bought and am eating today: 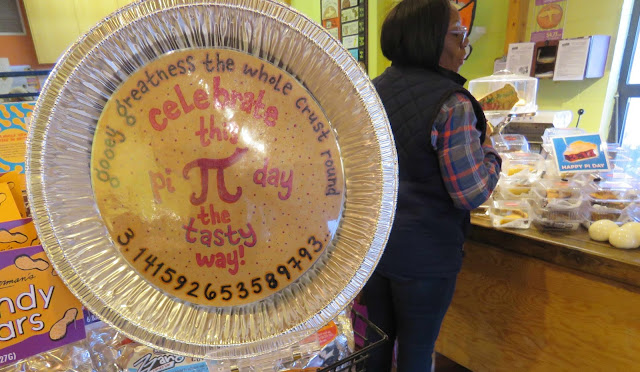 Love Pi day! Although we didn't celebrate with pie, alas. Didn't celebrate Monday either -- National Nap Day (because it's the day after the time change to daylight savings time; didn't know about this, but Mrs KR taught me about it). Berkeley is a great town, although I didn't know it until much later than when you lived there. I used to travel there for business at least once a year back in the day -- always enjoyed it. Anyway, fun post -- thanks.

This was great for Pi Day, Mae! I've been to San Francisco many times and love all the good food there, so many restaurants, but have not been to Berkeley! I enjoyed reading about Rubin, sounds like he didn't lack for enthusiasm and was a go-getter! Take care

This is what I love about reading these Weekend Cooking posts - you learn so much and "visit" places you've never been.

Because I baked a snack cake last weekend, I didn't bake a pie for pie day this year. Fun post.

I never knew Pi day was a thing until I saw so many blog posts and instas on it. Cool, another way to celebrate great pies.