Throw your food across the kitchen and also throw this book ... 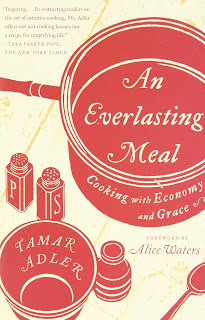 Tamar Adler's cookbook and kitchen meditation is titled An Everlasting Meal: Cooking with Economy and Grace. Her writing has a distinctive style: it's very poetic, but entirely, all 200+ pages, are in the second-person; that is, addressed to "you" the reader.

All of the book is couched as advice. Every statement tells what you must do. After reading for a while, I think that you (and I know that I) started to rebel. Also, it's too fake: she pretends it's simple cooking when it's totally complex and overdone. Excessive!

Advice to Tamar Adler in return for her kind suggestions:


Hearing from Tamar that I must cook everything very carefully by very old-fashioned methods in my own kitchen makes me think about MacDonald's. In fact, I just also finished Eric Schlosser's book Chew on This which would normally make me want to stay away from MacDonald's.  In contrast to Everlasting, Shlosser isn't didactic at all: that's one of his strengths. Chew on This really suggests how to make choices.

I don't want to do EVERYTHING the hard way as Tamar preaches. I want to make compromises, and I want lots of different flavors and styles of food, not just what I can make by taking huge pains with slowly preparing hard-to-use vegetables, farmers' local eggs, and cheap cuts of meat. (Note: some of these aren't even cheap any more because books like this have made them trendy. I won't even talk about trendy which is another flaw of Everlasting.)

I might like many of the recipes that appear in Everlasting. I might even be able to learn some things. But it's too didactic. I rebel instead of learning. I heard of Everlasting because it's being excerpted in The Guardian. LINK HERE. A few excerpts are all you need -- I wish I hadn't bothered to buy the book, but just read these. They don't make you want to do violence to anything at all in your kitchen.
Posted by Mae Travels at 9:36 AM

That's way too complicated for bacon! I want my bacon as bacon -- skillet, oven, microwave, I don't care! OK -- I'll chop it up for Julia's recipes (or shrimp and grits) and happily because that takes less than a minute and it's tasty but GOOD GRIEF!

Yes, Tamar sounds like the Marie Kondo of the cooking world. Lots of chirpy advice that basically comes down to "My way or the highway, sweetie." I'm all for sharing advice, I'm all for helpful hints but the whole tone is what makes or breaks it for me. This one I can do without! But I LOVE, LOVE, LOVE the post and your writing style here!