The following quotations all come from Inspector Imanishi Investigates, a fascinating detective story set in Tokyo and other parts of Japan around 1960, and published in 1961. As many detective authors do, the author Seicho Matsumoto includes many details of the meals that the inspector eats as a murder investigation drags on for months. I was especially surprised to find how often sushi shops were mentioned.


"He felt hungry. He spied a sushi shop that was still open. He asked his wife, 'Shall we have a few bites of sushi?'  His wife peeked into the shop and said unenthusiastically, 'Let’s not. It’s ridiculous to spend money like that. I’ll cook something special tomorrow.'" (Kindle Locations 1826-1829)

Imanishi came out of the back street. The sushi shop was getting ready for business. A young man was hanging the shop curtain outside to let customers know that it was open. The man with the beret might have stopped in there to have some sushi. ... 'Sorry to bother you when you’re so busy. I came in because I wanted to ask you something.' 'Yes, sir, what is it?' The sushi master took off his headband. ...'Did a tall man in a beret come here to eat some sushi toward the end of last month, late at night?'... "Hm. Did he eat some sushi?' 'Yes. It was around eleven.' (Kindle Locations 2449-2471)

"Emiko brought out some sashimi, poached turbot, and pickles from the kitchen and placed them on the dining table. 'What is this fish?' Sekigawa asked, looking at the sashimi. 'It’s sea bass. I went to a sushi shop and asked them to prepare it. They said it’s the season for sea bass.' (Kindle Locations 883-886)

"They entered a narrow bar that served steaming hot oden, vegetables and dumplings simmered in a flavorful broth. It was early in the evening and there were few customers." (Kindle Locations 1065-1066) 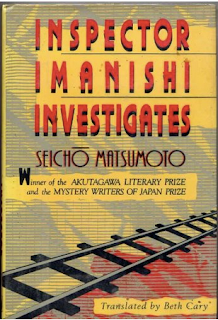 From all these descriptions, a reader can gain quite a lot of insight into the foodways of the time. Imanishi's sympathetic wife often gives him a late-night meal of tea poured over rice or salted fish. When he eats out with a fellow-detective, they eat curry and rice or cake and coffee. Other choices include miso soup with rice, or Chinese noodles and won-ton, or sukiyaki. In a rural part of Japan, after a long train journy, he finds that dried noodles were a local specialty -- "Rows of noodles were hung to dry next to the noodle-makers’ houses." (Kindle Location 455).

Imanishi came from a poor family. He grew up in a time of extreme hardship during World War II. When he smokes he cuts the cigarettes in half and smokes only half at a time. Once on a train, he eats a box lunch, and says to a fellow detective traveling with him: “Each time I eat one of these box lunches I’m reminded that it was my childhood dream to have one. It was almost impossible to get my mother to buy me one. They must have cost about thirty sen in those days.”(Kindle Locations 655-656)

The narrative covers the intertwined lives of inspector Imanishi and of the suspicious characters he investigates, and of course his eventual surprising discovery about which one of them was the criminal and why he chose his victims. The detecting part of the novel follows the conventions one usually finds in western detective fiction. However, a western reader today might be very unfamiliar with the urban environment, the artistic ambitions of the suspect characters (who belong to a group of writers, artists, and musicians called "Nouveau"), the many local accents in the Japanese countryside, the social customs, and the levels of respect and politeness all efficiently sketched out in the novel. I find the details about the foods they ate to be especially enlightening in trying to imagine this now-exotic situation.
Posted by Mae Travels at 10:50 AM

Livingston the food angle to this post. My wife read & enjoyed this book

Another book I will have to check out! And I like the food references. Take care

This sounds like one I would really like! And I've never been a fan of Japanese fiction but I think I just might like a Japanese mystery! And the writing is lovely -- artists and writers and Tokyo? I think it has three subjects I'm interested in right there. Four -- sushi!

I loved this Japanese mystery, but it's interesting how I didn't notice the food references that you pointed out so beautifully! I love how readers come to a book with their own specific "lens" which creates new view for all of us on blog posts. Thanks for the great insight!