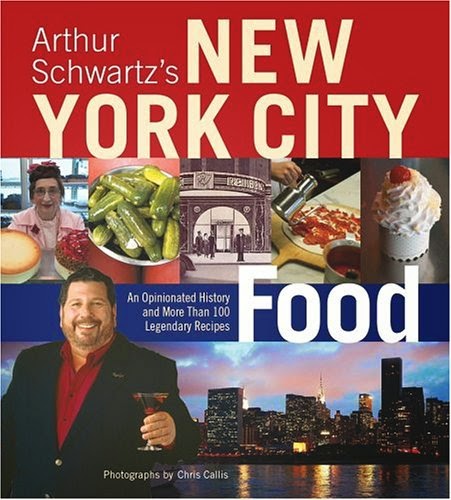 Food is something New Yorkers eat in a restaurant.

A legendary recipe originates with a famous restaurant chef.

History means, among other things, setting the record straight about who invented famous dishes. Like a Reuben sandwich, Waldorf salad, or chocolate lava cake.

These definitions are central to Arthur Schwartz's book New York City Food: An Opinionated History and More Than 100 Legendary Recipes (2004).

More burning questions:
New York City Food begins with a fascinating summary of the foods of the Indian tribes who lived in Manhattan and Long Island and a summary of cuisine and agriculture in the Dutch colonial era. Most of the book then describes restaurant trends from the 19th to the beginning of the 21st century. Schwartz profiles famous restaurateurs and chefs, describes their establishments, and gives cameos of the wealthiest and glitziest people who ate there. He describes the lives and works of other food writers -- Craig Claiborne, James Beard, Barbara Kafka. He talks a little bit about middle class people, as long as they could afford some sort of restaurants. Food fads through the centuries aren't entirely without interest, and I enjoyed anecdotes about the diners and chefs. But my principal impression is of unimaginable snobbery.

Occasionally Schwartz, a former restaurant reviewer and writer of several cookbooks, acknowledges home cooking, or at least discusses trends like ethnic bakeries, Korean produce stands, or butcher shops. But he's really fixated on dining out and every aspect of restaurant life, not on food as a life-sustaining force or as a means of creating cohesion among families and social groups. That's just not his topic, which I recognize and respect. Consistently, most of the recipes are based on famous New York restaurant dishes, not on home cooking. By the way: I actually read all the way through this book, including the intros to most of the recipes. 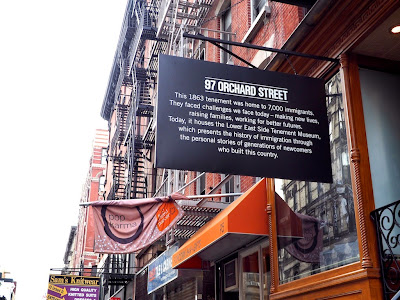 I bought this book when I came back from a brief visit to New York City last month, because a tour of the Tenement Museum made me wonder about supplying food in such a huge city and about just what the people ate and how the cooked it. I didn't learn much on this topic from Schwartz.

The people who lived in the tiny 3-room apartments on Orchard Street shopped at pushcarts nearby, and cooked as best they could on coal stoves making their small rooms filthy, smoky, and in summer unbearably hot. The building originally had no indoor plumbing of any kind: there were pit toilets and one water tap in the back yard, shared by over 100 people.

Meanwhile, as I learned from Schwartz's book, wealthy people were eating oysters, steaks, fancy desserts, and many interesting luxury foods at restaurants whose names are still quite famous. I'll have to find another book to learn about poor and even lower-middle-class people. The book I read just isn't the book I hoped for, which isn't the author's fault.

This book sounds fun and pretty interesting. I can see why it wasn't the book you were looking for but it also seems like one I'd like. I also appreciated your photos from the tenement museum -- that's a spot I'd like to visit if I get to NYC again.