In my little temporary kitchen here in Santa Barbara, I have decided to try out "French Cooking in Ten Minutes." Author Edouard de Pomiane was a microbiologist at the Institut Pasteur in Paris. In the early years of the 20th century, Pomiane studied various aspects of the chemistry of digestion. He became interested in nutrition and cuisine and began writing about food, eventually producing quite a number of rather popular cookbooks.

From 1923 until 1929, Pomiane did a radio show about cooking: probably the first cooking show ever broadcast.  He tried to simplify the process of preparing meals, recognizing that many women both cooked and worked outside the home, and thus were very pressed for time.

For my initial effort, I planned a meal that used one of his recipes: Sorrel Soup, and attempted to use his rhythm of cooking quickly to produce a three-course, French-style meal. My second course was meatballs (which I had ready to cook before starting) with cucumber-tomato salad (which wouldn't be at all French: Pomiane would recommend noodles or a canned vegetable -- the French love of canned peas to me is just as mysterious as their love of Jerry Lewis). The third course was cheese with fruit.

My first challenge was to obtain the soup ingredients, specifically sorrel and semolina. Sorrel is a rather sour green herb that's used much more in France and other parts of Europe than here. I've found it in Michigan in the past.

I asked at every vegetable and herb stall in the Santa Barbara Farmers' Market Tuesday. Some had heard of it, some not. One farmer said he had planted it -- but it wasn't ready. Finally, at the far end of the market I found just a few bunches of it.

Next, I needed semolina, a type of wheat used in cereal and pasta. I found it in the bulk grain section of Whole Foods -- which was lucky as I only needed 2 tablespoons, and I'd hate to waste the rest of a big package.

Boiling water -- the key to the 10-minute cooking technique that Pomiane recommends -- is really easy. No matter what you are planning, he says, you start by putting a pot of water on the stove to boil. Cream and butter are also not hard to obtain. So I was ready. The clock starts when the water comes to a boil, but I started to cut and cook the sorrel per directions while the kettle was heating. I also started cooking the meatballs: 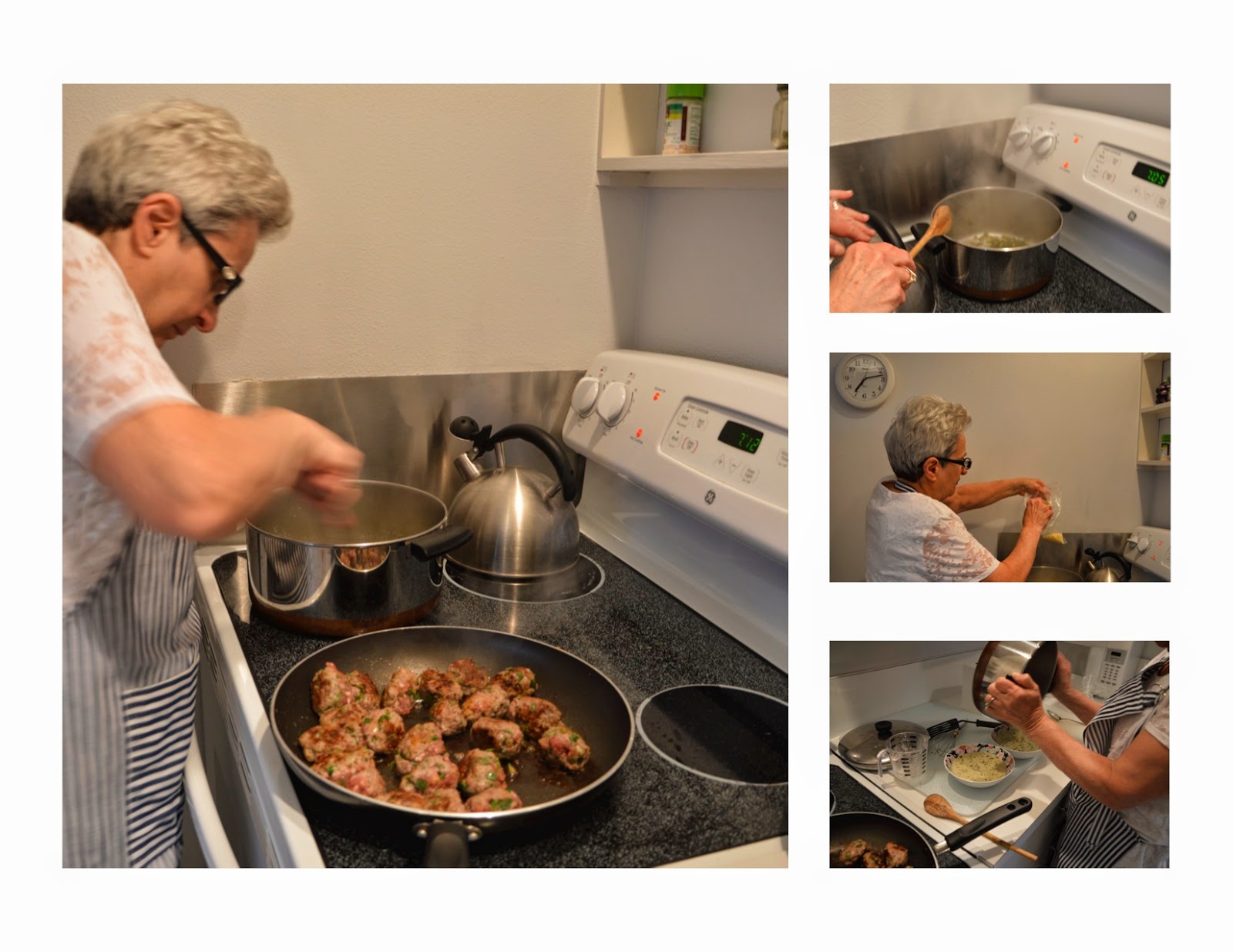 Well, the soup did take around 10 minutes from the time the kettle whistled. But I wouldn't really say this meal was ready with only 10 minutes of effort.

Update: apparently, I forgot to mention that the soup was delicious, and really tasted French. The meal seemed French style as well. Thanks to those who asked here & on FB.
Posted by Mae Travels at 1:35 PM

What a cool book.

This is great -- but how did it taste? What a fun exercise in truly classic cooking!