A New Look at Canned Goods 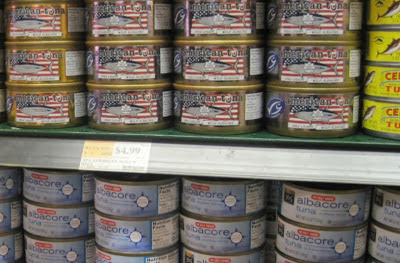 From Harold McGee, "Age Your Canned Goods," a very eccentric article about the way that the flavor of canned goods changes as they age: not always for the worse. In fact, he cites a number of experiments where people liked older canned goods better than more recent ones. Aged canned tuna! Aged canned sardines! Even Spam! His subtitle summarizes this view: "Why I now think of best-by dates as maybe-getting-interesting-by dates."

"As far as I can tell, European connoisseurship in canned goods goes back about a hundred years. It was well established by 1924, when James H. Collins compiled The Story of Canned Foods. Collins noted that while the American industry—which started in the 1820s and took off during the Civil War—focused on mechanization and making locally and seasonally abundant seafood and vegetables more widely available, the European industry continued to rely on handwork and produced luxury goods for the well-off, who would age their canned sardines for several years like wine. Today, Rödel and Connetable, both more than 150 years old, are among the sardine makers that mark select cans with the fishing year and note that the contents 'are already very good, but like grand cru wines, improve with age' for up to 10 years.

"But the appreciation of can-aged foods wasn’t unknown in the United States. Collins recounts an informal taste test conducted by a New York grocer who rounded up old cans from a number of warehouses, put on a luncheon in which he served their contents side by side with those from new cans, and asked his guests to choose which version they preferred. Among the test foods were fourteen-year-old pea soup and beef stew, and twelve-year-old corned beef and pigs’ feet. The guests preferred the old cans 'by an overwhelming majority.'"

McGee, of course, always explores the chemical and mechanical details of his subject matter, so the details in the article are absolutely fascinating!
Posted by Mae Travels at 6:40 PM

Fascinating! And apparently this was not a "Deadly Dinner Party" (That's the name of an interesting collection of essays, mostly written in ~1993 but not published until a few years ago, about diagnosing mysterious ailments; the problem in the title story was bluefish, not canned, however, and in fact nobody died.) And then of course there's the eating of 100+-year old home-canned peaches in Louis Sachar's book _Holes_. I have wanted to eat ancient canned peaches every since.