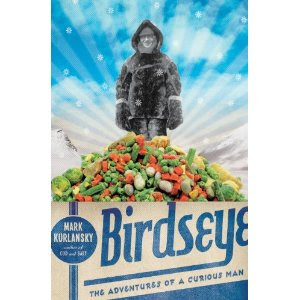 Wednesday night I attended the regular meeting of the Culinary Book Club that I belong to. We read Birdseye by Mark Kurlansky, a biography of Clarence Birdseye. The subject of the bio developed processes for frozen food technology: how to freeze it quickly with a variety of huge devices, package it with new materials that survived freezing, and keep it frozen -- besides industrial freezing machines, he also developed less expensive refrigeration units for shipping and storing it in markets. Birdseye began with his own business, and then sold his idea to a company that could invest more in the project than he could raise.

That company became General Foods, and Birdseye, whose name became synonymous with frozen food (especially peas) ran a food lab for them for a number of years. I found him interesting both for having changed American food, including ideas for distribution to grocers and inventing freezers where they could store the foods he froze, and for his amazingly adventurous attitude towards eating and trying exotic foods and small game animals that most of his peers would not have accepted.

Birdseye also invented a variety of other very practical things such as a reflector lightbulb. He traveled to a number of spots in the New World, like Labrador -- where he got the idea for frozen food, which in its time was a big improvement over canning. The discussion was fun; some of us talked about our memories of refrigerators, ice men, ice boxes, and home freezers. One woman described how she received an upright freezer for a wedding present when she had almost no money, but her family considered it essential. 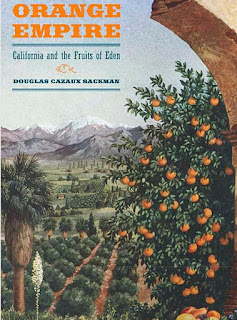 This week also, I read another book, Orange Empire: California and the Fruits of Eden by Douglas Cazaux Sackman. It's a more academic study but very well-written. It details the history of the orange industry in California -- and it was really an industry, allied with the Southern Pacific Railroad. Beginning around the turn of the 20th century, orange-grove owners figured out  how to mass-produce uniform fruits, which became a commodity. The growers' association united the rich owners of large groves, who marketed collectively under the still-well-known name Sunkist.

The industry pioneered ways of advertising to create demand, including medical studies commissioned to show how important oranges were to health. Sound familiar? It was done again, perhaps more dishonestly, this decade by pomegranate producers in California, though the author doesn't mention that.

The book answers one question I had wondered about in the past: when did oranges become common rather than a special treat to be eaten only at Christmas. I loved the description of a Sunkist ad where a woman asks a small grocer for oranges, and he says he stocks them only at Christmas -- but the point of the ad is that the bigger supermarkets, which were cooperating with the orange growers and railroads, were beginning to stock them all year. I believe this was in the 1920s, by which time piles of perfect oranges were on display in markets throughout the land, and people were becoming convinced to drink OJ for breakfast daily and feed it to babies.

Further, the book documents how mass orange-growing was an industry with political implications for labor and unions, use of pesticides and other poisons, immigration, racism, exploitation of land and workers by rich growers, water rights, and a number of other issues that started 100 years ago and haven't been resolved in America. One radical critic of the terrible labor practices and union-busting efforts referred to the oranges as Gunkist! The conflicts involved a number of very famous Americans and famous books like Grapes of Wrath of course, as well as a fascinating governor's race in which the author Upton Sinclair almost won on a very radical platform. (The growers and railroads used a negative campaign to defeat him in the last 6 weeks: makes me shudder!)

Most of the California groves have now been replaced by housing developments and urbanization; for example, Disneyland replaced orange groves. Both books are very very American stories that reveal interesting developments in American foodways.
Posted by Mae Travels at 11:39 AM

This is fascinating. I've been such a bad blog visitor with everyone. Seeing this reminds me how much I've missed!

Mae,
Thanks for these reviews that speak to my recollections of the advent of frozen foods and also the "ten cents --- all you can drink" juice stands along the roads neighboring the California orange groves of the 1930's.