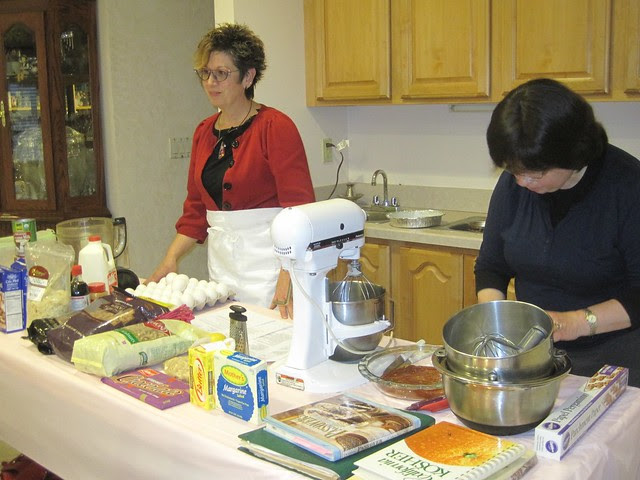 Above, you can see the demo table which had been painstakingly prepared by Lori (left) and Esther, our hostess. Throughout her demo, Lori fielded questions from attendees, who included novice cooks as well as those who were highly experienced. She showed a number of techniques, such as beating the egg mixture for a Mexican flan, folding the dry and then the wet ingredients into beaten egg whites (to prevent them from deflating), tapping a pan of cake batter before baking (to remove oversize air bubbles), and turning a cake upside down with a bottle in the center of a tube pan (to prevent the cake from sinking as it cools). Lori showed us an incredible variety of Passover desserts. Some were conventionally kosher for Passover; others were ultra-kosher, meaning they not only were free of flour, corn products, and leavening, but didn't even contain any matzo products.

Though I do not change dishes or remove any foods from my home or from my diet during Passover, I was fascinated by the demo. Passover, I believe, ties all Jews together, whether they are secular and minimally observant like me, or like Esther, who is highly observant. Esther reminded us that among many meanings, Passover represents the birth of the Jewish people. In her view, the careful and limited diet at Passover represents the care with which one feeds a newborn baby! 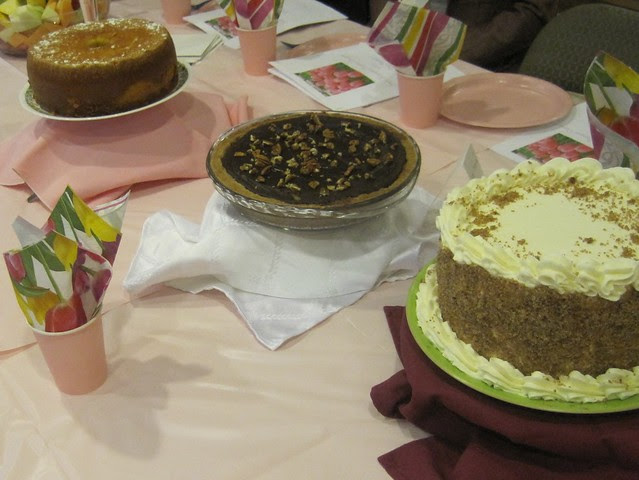 The ingenuity of Passover desserts also fascinates me. Without careful thought, what baked goods could be made without flour or leavening? And for those who keep kosher there's the added requirement that a meat meal (the usual choice for the Seder) include only non-dairy desserts. Well, in the photo above, you can see three classics -- left to right: sponge cake, carmel fudge torte (in Lori's extraordinary version), orange and nut torte with non-dairy frosting. Everyone was offered full-sized portions of every dish -- I opted for small bites, but we were made welcome to also take home what we couldn't eat.

My friend Abby is the master of the nut torte, but otherwise among the versions of these desserts, Lori's were far better than most that I remember. These three cakes, along with some extraordinary brownies, were waiting for the participants when we arrived; we also watched demonstrations and tasted several other baked goods. 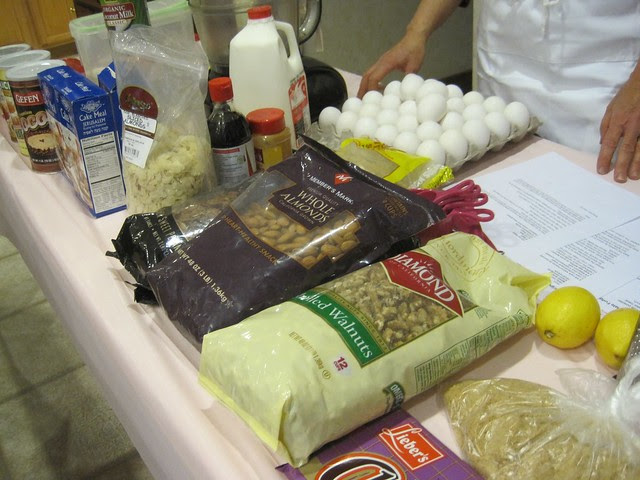 Also on the demo table, were both basic and unusual ingredients for Passover baking. The usual: matzo cake flour, nuts, eggs, coconut milk (to substitute for heavy cream), lemons, and oranges. Unexpected: confectioner's sugar made without cornstarch; vanilla extract made without grain alcohol; specially handled chocolate and cocoa powder. For pie crusts, Lori makes her own graham crackers from Passover ingredients -- another unexpected item.

Lori's Simply Scrumptious Catering provides meals or pastry for weddings, family reunions, business meetings, holiday parties, Bar and Bat Mitzvahs, and many other celebrations. Menu choices include a variety of ethnic and American dishes; while she offers kosher catering, she also does lots of work outside this area.
Posted by Mae Travels at 1:17 PM