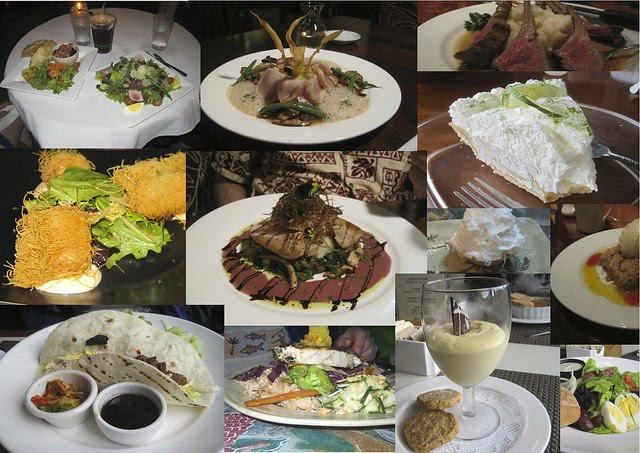 Last week in Hawaii, we ate out several times, using the kitchen in our condo the remainder of the time. The photo above is a visual summary of the foods we ate and the presentations of food we enjoyed. To see the individual photos at full size, check out my Flickr site here: Kona Dining Out 2012.

Over the years, the food in Hawaii has developed in a most wonderful way. On our early visits around 20 years ago, most restaurants served vegetables and salads made from Mainland produce -- neglecting the possibilities of local farmers. Meat was probably frozen, and the food was typical of big hotels, or was the fake Trader Vic's type of Pacific made-up exotica including overly sweet cocktails etc. Even restaurants that served fresh fish didn't pay much attention to the side dishes or create very exciting results with the remarkable ocean products they could easily obtain.
Back then, local farming wasn't very noticeable -- maybe a farm stand with a few bananas and papayas from the tree. Farmer's markets were maybe just getting started, but they aren't my topic today.

The exception to this sad situation, beginning in the late 1980s, was Merriman's Restaurant in the upland community of Waimaea, where Peter Merriman had worked with local farmers to develop the types of high-quality produce that were in fact natural to grow in the wonderful Hawaiian climate. He contracted for lettuce, tomatoes, corn, and many other kitchen-garden crops, as well as special pork, lamb, beef, and fresh local fish, and the result was then and continues to be highly satisfying.
Merriman also was a founding member of an association of Hawaiian restaurants from other islands that was developing its own style, originally called Pacific Rim Cuisine. (The term has been misused and appropriated since then, I'm afraid.) As the current Merriman restaurant website says: "In a time when a typical restaurant's fresh ingredients were sourced only from large distributors, and local producers were forced to sell at the same price points as their imported counterparts, Merriman went against the grain. He was the first in Hawaii to go directly to local farmers and ranchers to source his menu, and was happy to pay a higher cost."
On our first trip, Merriman's was still unusual, though it had one direct competitor called The Palm Cafe, which closed a few years later.* Our lunch at Merriman's last week demonstrated the continued quality of the restaurant -- despite the fact that it's now one of several Merriman's restaurants on other Hawaiian islands.

The influence of Merriman's and of the local produce movement is highly visible in other restaurants where we enjoyed a variety of dishes. For example, Island Lava Java was originally a cafe and bakery, and is now serving locally sourced lunches and dinners -- I don't know when they expanded their menu, but the cafe has been in business for a long time. I had a really good Salade Niçoise with seared ahi tuna, local greens, and other local vegetables when we ate there. I also had Salade Niçoise at Merriman's a couple of days before: the Lava Java one was comparable, and Merriman's does not include tuna, only anchovies, alas.

Another restaurant that's been around a while serving fantastic local foods is the Keei Café, in one of the small towns going south out of Kona. We've been there on several recent trips, and again found it very enjoyable. After several fish dinners, I ordered rack of lamb, and found it delectable. Their desserts are most tempting, but I always seem to order the mango cobbler, which I love.

On our early trips we ate at a small Indonesian place in town called Sibu in a picturesque old shopping area under a gigantic Banyan tree. A few years ago, this went out of business and was replaced by Rapanui, a sort of general New Zealand and Polynesian restaurant. Wonderful fresh fish! You can get lots of Asian-style vegetables and flavored rice, OR for the really lazy eater, you can do what I did and order fish and chips. Also a delightful coconut cream pie in an individual tart shell all covered with whipped cream, which I seem to order every vacation.

Two other restaurants I like are Kenichi Pacific and The Coffee Shack. Kenichi Pacific is oddly located in the same shopping center with our main grocery store, Long's Drugs, and a movie theater. But it has really nice but pricy sushi, beautifully presented, as well as elegant and quite delicious fish entrees.

The famous Coffee Shack -- mainly a breakfast or brunch place -- is most of the way to the Pu'uhonua o Honaunau National Historical Park and to one of the world's best snorkeling beaches. We stopped there on the way from snorkeling over the most amazing yellow, purple, and greenish coral and seeing every type of fish we could imagine. It's a very nice life in Kona!

* As I wrote in 1999: Our favorite restaurant has been replaced by a Hard Rock Cafe. This lamented location was called the Palm Cafe (upstairs) with a less formal version Under the Palm below, in Kona. It featured Pacific Rim or fusion cooking, very delicate. I had delicious ravioli filled with chicken and ricotta in a vinegary sauce, followed by local swordfish. For dessert, the creme brulee (3 little dishes, coffee, coconut, and chocolate) is marvelous, as is the ginger creme caramel. Between 1993 and 1996, I think the Palm Cafe improved on an already good thing. But I guess it wasn't really making it.
Posted by Mae Travels at 7:07 PM