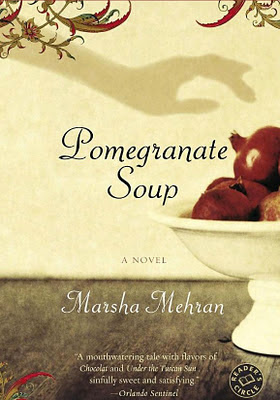 I just read the novel Pomegranate Soup by Marsha Mehran. The book features descriptions of food and cooking, including one Persian recipe in each chapter. However, these descriptions are really the only feature of the novel that I find truly strong and enjoyable. The recipes for chicken with walnuts and pomegranates; various soups, yogurt drinks, and deep-fried pastries sound wonderful.
The premise of Pomegranate Soup is like a well-known recipe. Take an insular village somewhere in northern Europe (here, Ireland). Invent some quirky inhabitants (quite a few here). Bring in an immigrant or two to found a restaurant or cafe (here, three sisters from Iran and an elderly Italian widow who had already been the outsider in a village for 40 years or more). Introduce the villagers to exotic cooking. They like it (a bit too fast here). Create some jealousy, greed, adolescent pranks, rivalry, and love interest (maybe a little contrived). Yup, yup, yup, a kind of a melodrama.
The portrayal of the sisters and how they fled the revolution in Iran is interesting and plausible. The portrayal of the Irish villagers and the Italian widow is pretty plausible too, at least at first. The events of the story start out not too bad. But as things progress, the story goes out of control -- spoiler coming.
The ending, where all the evildoers and mischief makers see the light, repent, and swear to be good, doesn't do much for me at all. Also, throughout the book the descriptions are often a bit over-written, sometimes with rather odd word choices that overreach to try to make it more vivid. In sum, it's a rather weak novel with really good food writing.
Posted by Mae Travels at 3:46 PM

It's getting more and more difficult to rummage through good reading and good recipes. I'm not sure how I feel about the concept promoted these days.

I've been thinking about seeking out Sarah Hale's "Northwood" this season. Have you ever read it?

Thanks for sharing this review. Will you be joining us for the last week of the Cookbook Party???

Sounds a bit "light" but sometimes a formulaic read is just what I need. I haven't cracked the cover yet for CTB (February/March selection) but will as soon as I finish The Dovekeepers and the other two books I have started. :) Glad to get your perception and to know there are recipes.