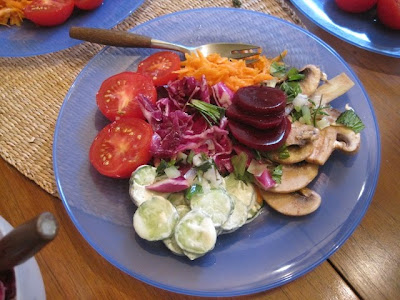 Crudités is a French word meaning raw vegetables. Both words and culinary dishes have a habit of changing. We used to order crudités in small, inexpensive restaurants in France, and we have a fond memory of them. Both the word and the dish have changed over time.

Crudités do not appear in any of my cookbooks, not in American-French (like Julia Child) nor in translated or untranslated French cookbooks like Madame Maigret's Recipes that I described yesterday. Crudités were too simple and obvious. Who needs a recipe for raw vegetables? Only Ginette Mathiot's 1955 La Cuisine Pour Tous suggested "Hors D'Oeuvres Cru" with a list of possible elements in this dish, to be served by themselves or in combination.

The word crudités has been completely adapted into English, meaning any preparation of raw vegetables, from something like the French tradition to a plate with carrot sticks, celery sticks, bell pepper strips, and ranch dressing as a dip. On some French websites I even noticed a reference to guacamole as a dip. Dipping food into a common bowl would have seemed very unFrench at the time we were eating crudités in little restaurants -- but as I say, both words and dishes can change. I wonder how much change has happened to madelines -- now available everywhere thanks to Proust's passage making them so famous.
Posted by Mae Travels at 8:17 AM

Now you got me wondering. I'll have to check a few of my books to see if anyone mentions crudités.

As they say, "this looks good enough to eat!" I haven't thought about looking up crudites in cookbooks, generally I just thought of them as the carrot sticks with dip! Now I'll go on a quest. I have to admit how much I love raw veggies -- or marinated (those mushrooms sound good!). Especially at this time of year when eating from the land is so darned easy!