Reading "The Zen of Fish" by Trevor Corson

"According to Japanese folk tradition, each grain of rice contains not just one spirit but seven. In his two batches of sushi rice, totaling roughly 20 pounds, Takumi was currently responsible for the fate of some three and a half million tiny gods." (p. 37)

As I read this amusing book, I'm thinking of my own recent enjoyment of sushi, as in the photo below, taken in Mountain View, or thinking of the sushi roll from Whole Foods that I ate for lunch yesterday. 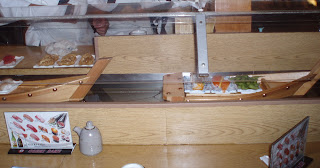 "Like a martial-arts dojo or a school of tea ceremony, each sushi bar follows techniques handed down from the founding masters of the lineage to which it belongs. The most closely guarded secret is usually the ratio of vinegar to salt in the sushi rice. It's said that a master chef can tell the lineage of a sushi bar simply by tasting its rice." (p. 41)

Corson mixes bits of history, Japanese food lore, pop culture, American restaurant culture, and a big measure of food chemistry, for which he credits Harold McGee's books. All the information comes up as he follows a class for aspiring sushi chefs. It's my favorite type of writing, where everything seems spontaneous, but is clearly the result of careful intentions. His writing skill was equal in his book The Secret Life of Lobsters, but there's nothing repetitive about this.

"The cucumber roll gets its Japanese name, kappa-maki, from a mythical water sprite called a kappa, believed to inhabit lakes and rivers. Kappa are known for gobbling up children and generally causing trouble by farting and looking up women's kimonos. In old Japanese paintings, these ugly green water sprites look rather like Teenage Mutant Ninja Turtles. In fact, in one of the Teenage Mutant Ninja Turtle films, the turtles travel back in time to medieval Japan and get mistaken for kappa. The only food kappa prefer over human children is cucumbers. Thus, the name of the cucumber roll." (p. 86-87. Note: I found the photo online; it's not in the book.)

Eventually, Corson also talks a bit about Japanese history and how sushi developed for Japanese taste, and then about recent US restaurants and how sushi became popular with film stars, high-rollers, and eventually, with the rest of us. I loved learning about sushi secrets: like the machine that extrudes perfect rice balls for sushi, saving the labor of hand-rolling them, or the cost-effectiveness of the little trains or conveyor belts which were the main labor-saving device that enabled lower prices in Japan and also in the US.

"When it comes to aroma, uncooked fish fall flat. In the human brain, smell is linked to memory. A platter of raw fish cannot trigger the feelings of comfort and happiness that people associate with the smell of their favorite cooked foods. Perhaps that is one reason sushi chefs pay close attention to visual presentation." (p. 118)

I wonder about the smell issue: most Americans don't like the smell of fish, cooked or raw, and much fish here deserves that reaction. Maybe some of the loss of inhibition about eating sushi happens to Americans when they realize that sushi doesn't smell. Especially, it doesn't smell like fish. Remember what Trinculo said of Caliban: "What have we here? A man or a fish? Dead or alive? A fish; he smells like a fish; a very ancient and fish-like smell; a kind of not-of-the-newest Poor-John. A strange fish!" (The Tempest, II, ii, 16-20)

I've been thinking and reading about sushi quite a bit lately, and as I continue with The Zen of Fish, I'll be posting more. Here are my other posts -- Sushi in Mountain View, Sushi Rolls and Sashimi, and a post about two other books on Japanese food: Far-away Food.