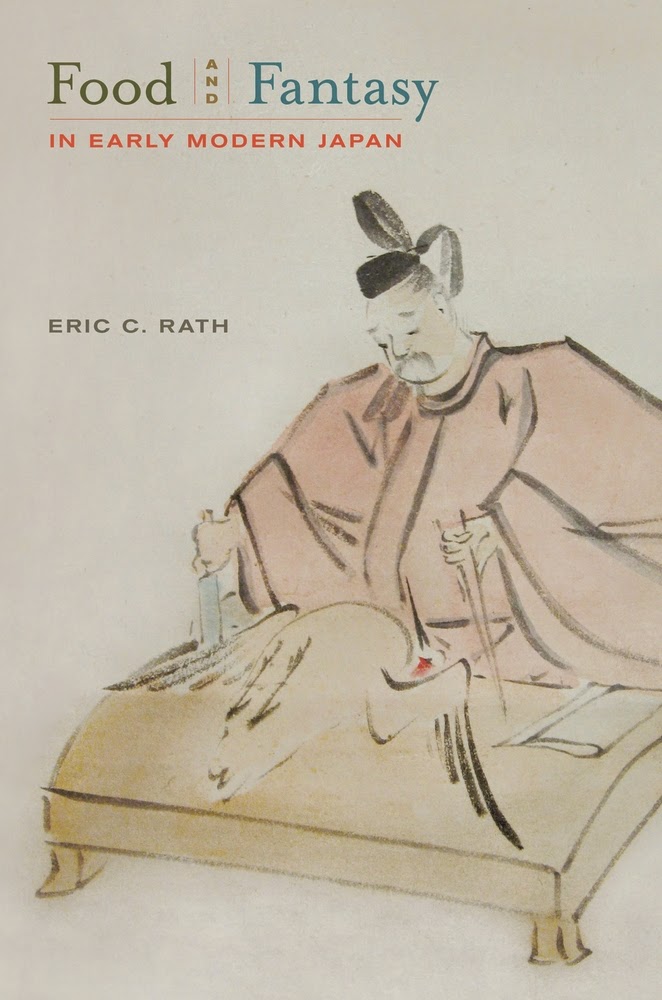 Did you ever try to imagine what it would be like at a medieval banquet? Do you enjoy reading reviews of famous but unattainable restaurants like El Bulli in Spain or the trendiest spots in New York? Do you read recipes just to imagine what the food might taste like? Do you like to watch extreme cooking shows, things no one does at home, on food TV? Maybe you have heard of the art works made of meat, that rot in art galleries -- or Lady Gaga's meat dress.

Centuries ago in Japan, people loved books that created imaginary situations like these modern ones. The fascinating book Food and Fantasy in Early Modern Japan by Eric C. Rath documents a variety of this popular literature, as well as describing various private manuscripts that were written by early chefs and food workers in noble houses.

Shown on the cover (left) is a special knife artist in early Japan, performing a ritual of slicing up a crane with a special knife and long metal chopsticks. High nobles watched -- but the final display of raw meat or in many cases fish was for looking only, never for eating. Rath documents this knife-ceremony in the second chapter of his book, "Of Knives and Men." (Rath, p. 38-51)

Early banquets were highly ritualized, with prescribed numbers of dishes on prescribed numbers of food trays set before a noble diner such as a visiting feudal overlord. In many such events, the foods on the ritual dishes in their ritual locations weren't even really edible: for example they would serve dried abalone strings that needed hours of reconstituting before actually eating them. The polite way to react -- pretending to eat a bit and then hiding it in one's sleeve -- was documented in the books that were not only cookbooks but also etiquette books. Rath repeated one rather funny piece of advice: to pretend to eat and then hide the bit of food in a nose-wiping paper, in other words, wad up this inedible thing in a piece of kleenex!

A bit after the meat-carving rituals were popular, many culinary books, illustrated by wood-block prints, were best sellers, although the menus and recipes (or partial recipes) within them were only possible for nobles to eat. Laws prevented even fairly wealthy people from purchasing many of the luxury foods required -- ordinary readers of the books couldn't have afforded a staff of over 200 cooks, servers, and helpers as suggested in the instructions for such banquets. A few of the ideas may have been usable for upper class weddings or other special events, but mostly the hundreds of thousands of book buyers just wanted the fantasy.
Early Japanese cookbooks, Rath points out, sometimes explored a single food, beginning in 1782 with One Hundred Tricks with Tofu. The two-volume Secret Digest of Exceptional Radish Dishes throughout the Land, for example, was written by Kidodo, author of several such works. Secret Digest explores daikon radishes from many perspectives, including religious uses and radish lore, ways to cook or prepare the food, ways to make decorative flower-like arrangements of the radishes, and history of the dishes. (Rath, p. 177)

Other books were obviously satiric, describing impossible foods, like a book called Fish Trap of Recipes which claimed not to be about cooking but "just a manual for someone seeking to create fanciful menus." (Rath, p. 161). One book created a fusion of foods and Noh drama, somehow lining up the dishes with the traditional characters and events of the opera-like plays. The author of Delicacies from the Mountains and Seas invented recipes using mythical creatures like "the nine-tail fox, the Zhu bird, an owl with human hands, and the Tuan-fish -- a carp that oinks like a pig." (Rath, p. 169) Also, actual foods were given fanciful names to distract people from the repetitiveness of every-day dining. Rice, miso soup, and pickles were served at almost every meal, with little variety within each category, and an occasional dish of vegetables, tofu, or grilled fish. (Rath, p. 118)

This wonderful book makes me think about the famous anthropologist Levi-Strauss, who said about the totems of primitive tribes that food could not only be good to eat, but also could be good to think. (There's a lot of discussion over just what he meant and how to translate his words, but that's not important now.)

Labels: Posted in 2014, What did historic figures eat