Food in Art and Art in Food 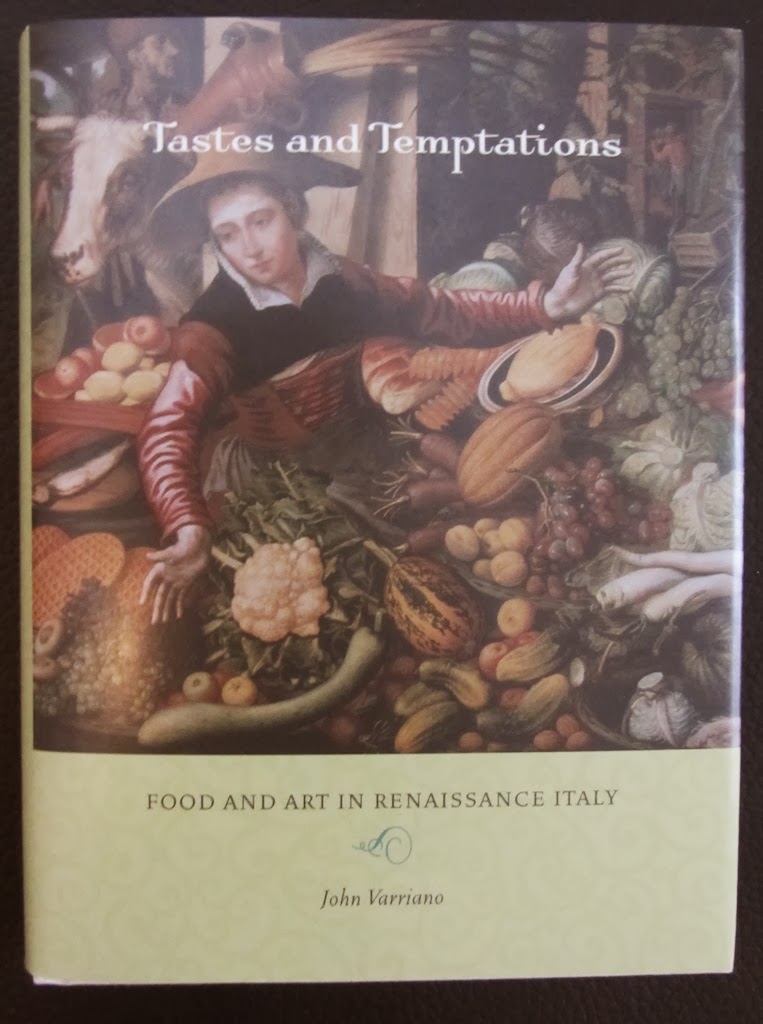 Tastes and Temptations: Food and Art in Renaissance Italy by John Varriano is like a banquet of fascinating concepts. I felt, when reading it, as if I have been waiting for such a book to tell me many things I wanted to learn about the relationship of food and art!

Italian Renaissance cookbooks and books on the art of cooking inform one of the most interesting parts of the study. Varriano compares developments in food theory to developments in art theory. He shows, by many examples, how these two focal points of Renaissance thought are parallel.

Intellectual and culinary currents in the Renaissance are linked in ways I found remarkable. Early paintings used a background of gold, with rather stiff colors and skin tones in the human subjects. Painters slowly developed more naturalistic ways to present human forms -- and in this process, they employed a number of food substances. Egg as a medium for tempera, a number of different oils as a medium for paint, and pigments from foods like saffron provided a variety of effects that the innovative artists explored. Renaissance cooks, meanwhile were also developing new uses for oils, eggs, and of course many other foods. Varriano summarizes these trends:


"By 1500 oil had replaced eggs as artists' binder of choice, whereas cooks continued to choose from an array of possibilities. Whichever method they adopted, it derived from somewhere else -- oil paint from Flanders, cooking oil from Arabia, and butter from northern Europe. Collectively, these ingredients became essential to the creation of Italian Renaissance tastes; indeed, many of the visual and gustatory refinements of the period could not have taken place without them." (p. 159)


Art works were sometimes made directly from foods. Sugar sculptures were popular as a luxurious way to decorate the large and opulent dining tables of the richest Renaissance princes and churchmen. Varriano gives many examples of how the sugar statues were made and decorated with gold or with colors. Some were made in molds that also were used for metal objects of greater permanence. Architectural and other decorative banquet items were also made from cheese, salami, capons and other unexpected foodstuffs. (They really make this weekend's L.A.Times Super Bowl stadium made of various foods look pitiful! )

Tastes and Temptations also discusses the development, in this era, of different types of elegant tableware, including pottery dishes decorated with classical figures and elaborate metalworks. I've seen many of these in art museums, and felt that the description gave me quite a bit of insight into what I've seen. The famous gold salt cellar of Benvenuto Cellini, shown above, is one of these objects.

Still life paintings, religious paintings of subjects like The Last Supper, and paintings of ordinary people and shopkeepers all provide material for studying food as the subject of art. Each of the author's treatments offered new insights about the paintings under discussion. For example, about Annibale Caracci's work "The Bean Eater," Varriano wrote:


"Judging from the man's garb and demeanor, he is clearly a villino, or country bumpkin. The meal so carefully laid out before him is consistent with the peasant diet... beans, dark bread, a torta da bietola (chard pie), scallions, and red wine -- all foods 'not to be eaten except by those who labor hard.' But in this context, the food probably signifies something more than lower-class humors and appetites."(p. 139)

In fact, scallions "incite the libido... Thus, a link between food, sex, and procreation may underlie the eroticism of many of these Italian genre scenes," continued Varriano. He gave illustrations from various writers about the effect of foods on the humors -- that is, Renaissance health theories, and showed how these theories were reflected in various paintings. All, I find, just fascinating.
Posted by Mae Travels at 7:30 AM

You really do delve into the relationship between food and art quite literally. I wish I had your enthusiasm for the same. Perhaps it is time for you to put something of your own in hard copy for us "laymen."

Scallions -- who knew? I agree with Louise -- you should be writing about this for something, somewhere. It's fascinating subject matter and you do it so well!

Very informative post. I enjoyed reading it and my favorite photo is of the Bean Eater. Great job:)