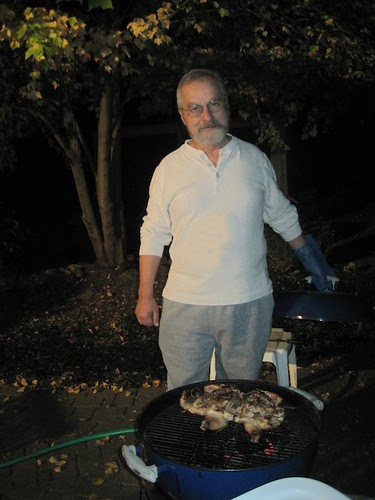 Though the day was warm and beautiful, the sun sets early in October. So here is Lenny, grilling in the dark. 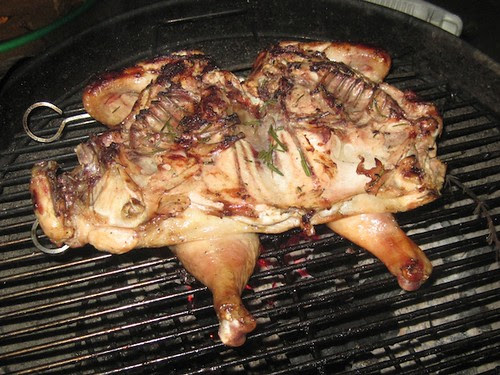 Chicken from Ernst Farm is available about once a month at the Ann Arbor Farmers Market -- and you have to order your chicken well in advance. Ernst Farm chicken has more flavor than any other chicken that I have found at the market or elsewhere (including Whole Foods' air-chilled chickens, which are good, but not that good). Some day I hope to visit the farm, which is around 45 minutes drive from here.

Today's chicken was quite large (over 4 lb.) and we spatchcocked it (that is, cut out the backbone and flattened it, using skewers to hold it in place on the grill and bring heat to the inside of the meat.

Fresh rosemary was available at another of my favorite market stalls this morning. I cut it up, inserted under the skin, and sprinkled the rest on the chicken along with a little orange juice and oil. Lenny patiently grilled the chicken, burning the rosemary stems and unused leaves -- this takes quite a while. He also grilled some eggplants that I used for baba ganoush. 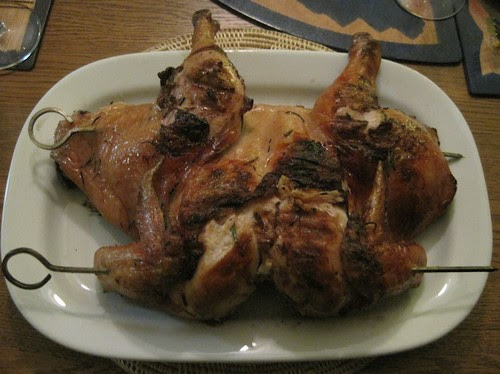 The result was subtle and delicious.

The first frost seems to be rather late this year. Raspberries, tomatoes, peppers, herbs, and other items that are often out of season by October are still on sale at the market. Besides chicken, herbs, eggplant, beautiful little raspberries, tomatoes, and peppers, I bought apples and a blue pumpkin -- though it looks greenish in the yellow indoor light in the photo. The woman who sold it to me said that her blue pumpkins were good to eat, as well as making unusual jack-o-lanterns. The orange pumpkin is also local, and sold as a "pie pumpkin." 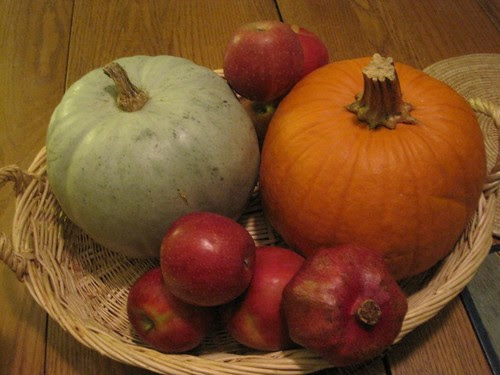 Yes, that's a pomegranate in the basket too, mainly for decoration.
Posted by Mae Travels at 9:31 PM