I never made Chicken Marbella

An op ed in Sunday's NYT discusses the career of Sheila Lukins, author of the very popular Silver Palate Cookbook, published in 1982, and its sequels. Lukins died last week, so it's kind of an extended obit.

In the article -- The Fickle Palate -- NYT food writer Kim Severson writes: "The enduring dinner party dish of the book — and the era — is chicken Marbella, a rather unremarkable baked-chicken dish that draws its character from prunes, olives and capers. Just mention it to any decent cook old enough to have had her own apartment in the 1980s and you will get both an eye roll and a nostalgic smile."

Severson (who isn't old enough to remember all this, I suspect) adds "The dinner party food of the 1980s followed a period in which ambitious hosts had exhausted themselves trying to master the art of French cooking." Other trends also emerge as Severson proceeds into the 90s when "...'Moosewood Cookbook,' with its zucchini boats and calorie-laden mushroom strudel, had quickly lost its charm." After Moosewood, more fads -- people turned to comfort food; more recently, to grains like quinoa (which I've noticed on a lot of restaurant menus lately).

There's something fishy about this summary of food fads of our time. It makes me think the New York Times is a little too trusting in its own material -- as if I needed more evidence of that. More generally, this summer a lot of articles about food fads and trends have appeared in many places. Most of them refer to the movie Julie and Julia, which I haven't seen. They mainly adore Julia Child -- I agree. As for their generalizations about food trends -- I disagree with a lot of what they say.

Severson, it seems to me, believes that everything she reads or writes in the paper of record applies globally. If the NYT says it's being done -- that's it: everyone everywhere is doing it. Through the decades, I've been aware of the numerous cookbook fads, as well as of Martha Stewart, who is never acknowledged in the article. Maybe she's anathema in the NYT food section? Somehow, I'm suspicious about these generalities.

Though I heard of the books, I never made Chicken Marbella. I never owned a Silver Palate cookbook at all. I didn't get around to Moosewood till years later. To be exact: I just kept plugging along with my obsession with French food. I wasn't typical of the type of housewives described in Lukins' NYT obit in which Julia Moskin wrote that Lukins "spotted a niche that had been created by the emergence of working women, who were interested in good food but lacked the time to produce it." Somehow I always took the time, as did lots of people. The many disconnects between what I read and what I know are why I'm having a problem with many recent articles about Julia Child as well as with this one.

In particular, I'm wondering about the claim appearing in many articles that virtually no one ever made Julia Child's recipes. Or the further claim that new buyers who have made her book a recent best seller recently won't cook from the book either. This seems so wrong! As an example, I bring up not myself but my friend Alice, who still loves the recipe for blanquette de veau, among others. Or another friend, Sally, who in the 70s repeatedly made Julia Child's coq au vin and baked Julia Child's French bread to go with it. Len made the bread as well, for a while.

The most cited article denigrating the content of Julia Child's books is by Regina Schrambling in Slate -- "Don't Buy Julia Child's Mastering the Art of French Cooking: You will never cook from it." Says Schrambling:"Those thousands and thousands of cookbooks sold are very likely going to wind up where so many of the previous printings have—in pristine condition decorating a kitchen bookshelf or on a nightstand, handy for vicarious cooking and eating."

A much more obscure source, the blogger Rachel Laudan, claims that Julia Child was actually perpetuating a nearly obsolete restaurant-style of haute cuisine. She writes: "The Americans–well, one way of telling the history of American food is an oscillation between the plain foods of democracy and the elaborate high cuisine of the world scene of gentility and sophistication. Julia Child, publishing when the Kennedys made gentility and sophistication respectable, neatly bridged that divide with democratic access (hard work and practice) to a sophisticated international cuisine." 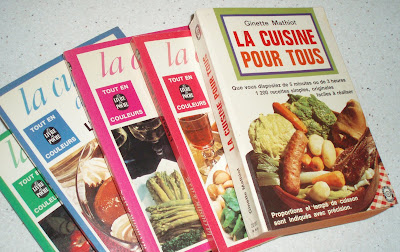 New York Times food writer Julia Moskin suggests also that it's much easier to make French food than Julia Child allows. In "A Boeuf Bourguignon in (Gasp!) Five Steps" she reviews a newly-translated work by Ginette Mathiot, first published in 1932. Mathiot's specialty was mass-market books in France. (Yes, they have them, even for cooking -- my little collection of them, purchased in 1976 and including one by Mathiot, is in the photo.)

Mathiot is very old-school -- when the new translation of her book is published, I wonder how people will like it. Her boeuf bourguignon, says Moskin: "has just nine ingredients (plus salt and pepper) and takes just five steps." And it "is equally suave and feels more satisfying — great payoff for little work." I'm skeptical -- French housewives may be assumed to be rushed, but somewhere back in that day, they had learned the techniques that Julia Child was promoting: so they were bringing a lot more to those simplified recipes than today's potential American buyer. I think the French now might find her retro as they have moved on -- I wonder how it will do when it goes on sale here.

What all this makes me realize is the enormous influence of Julia Child. No matter how many other cookbooks have been popular -- she's unique. Lots of writers agree with this opinion. At Gourmet magazine, a review of the new film by Laura Shapiro has a glowing view of Julia Child and her accomplishments (and hates the part of the film about Julie, for reasons I'm afraid I'll share when I see it). Her summary:

When Julia went to the Cordon Bleu and learned how to cook—by hand, without fancy equipment, from the ground up—she was also learning that passion and appetite weren’t enough. She needed technique, confidence, patience, and a host of finicky skills that only came with practicing. It was an approach to cooking that had all but disappeared from American kitchens, and without it Americans were never going to know what they were missing.

Similarly, the NYT review of the film:

The impact of that first volume of 'Mastering the Art,' and of Child’s subsequent television career..., is hard to overstate. The book stands with a few other postwar touchstones — including Dr. Benjamin Spock’s 'Baby and Child Care,' the Kinsey Report and Dr. Seuss’s 'Cat in the Hat' — as a publication that fundamentally altered the way a basic human activity was perceived and pursued.

I'm going to have to make a list of my favorite Julia Child recipes, the ones I have made over and over. From the 1960s onward. Not exclusively. But often.
Posted by Mae Travels at 2:00 PM

I think part of the problem here is generational. For those who didn't live through those periods, they can't really understand the progression of cooking and the influence of these cookbooks.

I learned via the Moosewood, as I was a vegetarian in my teens/early twenties. My mother's cooking was Julia Child, along with Marian Burros and Levine (forgetting the first name right now). My sister, 11 years my senior - Julia Child. I dabbled in Child but then went on to Silver Palate Cookbook and for my wedding received their New Basics Cookbook, which I really saw as lighter, easier versions of Julia.

If people don't bother cooking from Mastering the Art, it's kind of like having a collection of beautiful music and never listening.

FWIW, I really, really loved Julie and Julia - both parts. I hated the book. I mean really despised it. But I loved the movie and I thought it was just a gorgeous meditation on life, love and cooking. I also felt that Amy Adams and the two male leads also did brilliant work. Meryl Streep truly does channel Julia Child, though. It's truly astonishing.

Sorry to have written a book in your comments section - your post really got me thinking!

Thanks, Jen, for the comment -- long, but much shorter than my post! I'm glad I gave you some food for thought. Maybe you'll write more about all this... Mae