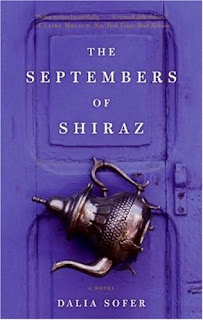 Prison food...fancy French chocolates rejected because they are not kosher...remembered feasts...tea in delicate glasses and a missing silver teapot...food forced on refugees as they slip across the border to freedom... As in many books, the details of eating, serving, cooking, and dealing with food in tense situations contributes to realizing a life that should be nearly unimaginable to a comfortable reader in a democratic, law-abiding society.

The Septembers of Shiraz discusses painful topics, and it's hard to keep reading sometimes. But ultimately it's not a completely dark book. It takes place in 1980 or 1981, at the time of the Iranian Revolutionary Guard and their terrorizing of the Iranian population.

The members of one family, the Amin family, are in three places: the father, in a prison without a trial, the mother and her 1o year old daughter in their luxurious house, and the son in New York, facing a life on his own without money from home.

The Amins are Jews, and the father's identity as a Jew, as well as his possessions and business success, inspire his captors to torture him. The accusation of being a spy for Israel is scarcely discussed except by his tormentors, its so out of keeping with his entire life. His fellow victims sometimes don't survive -- they are mainly Muslim, and also accused of non-revolutionary lives or of virtually nothing. This isn't the first prison book I've read -- it compares favorably with similar tales of arbitrary power exercised by petty tyrannical thugs avenging their sordid past. Yet sometimes the author seems to understand the resentment and anger built up under a truly unequal society of the past.

The son, with virtually no feeling for his religion, ends up living with Hassids in Brooklyn. Though attacted to the daughter, he realizes that he can't accept their way of life. He doesn't know what will become of him, removed from his real culture.

As I read, I thought about Roshanek, an Iranian refugee just the age of the one in the story. In approximately the year described in the book, Roshanek was a member of the Girl Scout Troop I led. She had escaped with her mother and brothers; her father had been murdered by the revolutionaries. I never found out very much about her story. Perhaps this book offers me a belated insight -- though her family were Muslim, not Jewish, the effect on the child was surely similar.

The author, Dalia Sofer, conveys the entire story seamlessly. Memories, investigations, interactions with servants and questioning by the revolutionaries -- the story emerges naturally from the author's choice of events.
Posted by Mae Travels at 12:35 PM