Food on the hoof

Any habitual freeway driver can recognize a cattle or pig transport -- a large semi truck with its high cage-like structures. If your windows are open, you can both hear and smell the animals. The famous stockyards of Chicago in the early 20th century depended on the railroads to deliver vast numbers of animals. In earlier times, herdsmen or cowboys or bedouins drove herds or flocks to pasture or to market; if you were on the road, it was quite a bit different than just passing a smelly truck.

To supply London markets in the 18th century with fattened geese, drovers walked their flocks from the countryside, after fattening them at various points along the way. They sold a few geese here and there to people who wanted to finish raising them for some special occasion such as Christmas. Turkey drovers, too, delivered flocks from rural areas to urban marketplaces. Imagine what it was like when hundreds of geese or turkeys walked by your home or your cart. (Thirsk, Food in Early Modern England, p. 255) 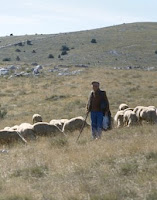 Long-distance delivery of meat developed at various times. By the end of the 19th century, refrigerated ships could bring large volumes of mutton, lamb, and other meat around the world from New Zealand to England -- quite a change from the delivery of meat on the hoof (or on the webbed foot!)

Yet in France in the mid-20th century, shepherds still herded sheep from Provence up into the hills for summer grazing, a custom called transhumance. I have a friend in Paris whose grandparents and other relatives still farmed in the Var region 50 years ago. She told me about an aunt whose husband she hardly knew, because he was a shepherd who spent the summers in the mountains with his flocks. Traditional sheep-raising still goes on in that part of France, though the herdsmen today use trucks to transport the sheep from winter barns in the valleys to mountain pastures.

American frontier songs, Medieval Provencal tales, Bible stories, Greek myths -- all often reflect a tension between farmers and herders. I've been thinking about how dramatically different times were, when you might see your potential dinner walking down the road. People say they want a closer understanding of what they eat. This led me to such a funny collection of miscellaneous historic meat facts.
Posted by Mae Travels at 9:37 AM

Great blog from one Ann Arborite to another! I love the travel blog, too. I'll definitely be back. The Jocondologie stuff is fascinating.