Here's a wonderful excerpt from an article on cauliflower:

... the Romanesco cauliflower is an heirloom and isn't to be confused with green cauliflower, or broccoflower, which is a cross between a broccoli and a cauliflower. Romanesco is astonishing in appearance, as much for its composition as for its color. Lime-green in hue, a head (or curd) of Romanesco is a near-perfect example of naturally occurring fractal: a fragmented geometric shape composed of smaller parts that are copies of the whole. The cauliflower resembles an M.C. Escher print more than something you'd find naturally occurring in your vegetable garden.

"The guys at Caltech come down and study them," says Alex Weiser of Weiser Family Farms, in whose farmers market stands you'll find all three varieties of cauliflower. "Something about the Mandelbrot theory." But you don't need a degree in mathematics to cook them. Whether they're fully grown or beautiful babies, Weiser prefers his cauliflower roasted, with just a little sea salt and olive oil splashed on before they're put in a hot oven.

This is from the article A brilliant comeback in the L.A. Times, published January 10. I Image-googled "Romanesco cauliflower" and found dozens of photos of this amazing fractal vegetable -- which I have also seen in stores. Here's an example of a photo I found -- 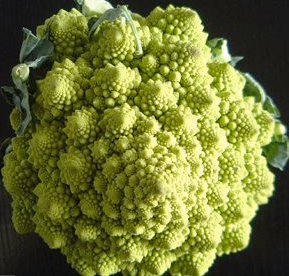 On the whole "A Brillilant Comeback" was a very interesting article with lots of recipes as well as historical information about cauliflower. This vegetable, I learned, had its origin "in the Far East and [was] carried by Arab traders to the Mediterranean, it was then brought to England by Flemish weavers in the mid-1600s and later became the rage of the French court."

I gave my favorite cauliflower recipe in an earlier post: "Cauliflower Soup"
Posted by Mae Travels at 10:12 PM