Across the street from my elementary school was the Public Library. Around the library was a beautiful garden with two ornamental ponds where small water lillies grew. One pond was up the hill a little from the other, and some stairs were in between the ponds. In spring and summer the gardens had pretty flowers.

In the winter, the ponds often had a thin layer ice on them. Under the ice was dark-colored water, so the grown-ups always said we shouldn't walk on the ice. Someone I knew did walk on the ice and fall in once. Luckily the ponds were only a little more than knee-deep, but the person who fell in had a very cold walk home.

Sometimes on the way home from school we went the long way and walked through the library's gardens. Sometimes we went into the library to get some books to read. The children's department of the library was on the lower floor, and the grownup department was upstairs. If you were going to the children's department you went in a special door on the side. Grownups went in the front door, on the other side from the gardens. Inside the library, behind a lot of bookcases, was an inside stairway. In the middle of each floor was a big wooden counter. A librarian sat in the middle of that, and when you picked out some books, you went to this librarian and checked out the books by writing your name on a card. The librarian put the card in a little box and stamped a due-date on a paper inside the book. In libraries now, a computer remembers who has which books, but when I was a child, computers were not yet used for these kinds of work. Everything was done by hand. 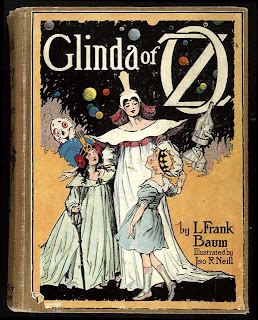 In summer, I had to go back to the library really often. When you checked out a book you could keep it for around two weeks, but I would get four books and start reading as soon as I got home. Once I got three Nancy Drew mysteries, and read them all in one afternoon, so I had to go back the very next day. In summer I went to the library every few days. In winter when I had school work, the books might last me the whole two weeks.

Many of the books about the Land of Oz were available in the library. I remember one book where the Scarecrow dug a really deep hole, fell in, and went all the way to China. This was what kids thought would happen if you dug a very deep hole, but of course that is not really how the world works at all, only how things happen in imaginary stories.

I did like the Oz books. After the first author, L.Frank Baum's books, many other authors wrote more books about Dorothy, Glinda the Good, Ozma, the Scarecrow, and all the other characters. I remember one story about a creature called the Gump, which was made of two sofas and a mounted deer or moose head, which was able to fly and carry passengers. Dorothy and her friends rode on the sofas and traveled to somewhere they needed to go. 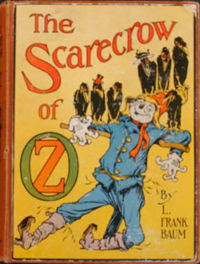 Magical things happened in Oz, and the characters were usually lucky and guessed what they had to do. Once there was a very bad man, and Dorothy (or another character) realized that if she threw an egg at him, he couldn't do bad things any more. It was similar to how Dorothy threw water on the Wicked Witch, or had her house land on the other Witch. Dorothy always came out ok.

Besides the Oz books and the Nancy Drew mysteries, the library had lots and lots of other books, and I enjoyed getting them out and reading them. Not far from the library were the City Hall and the Police and Fire Stations, but I do not remember ever going to any of those places.
Posted by Mae Travels at 5:59 PM