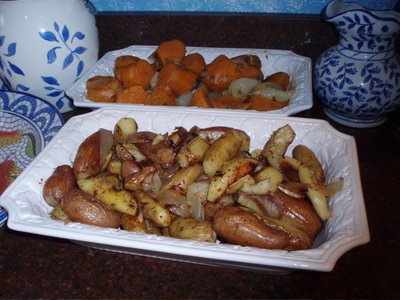 Roasted potatoes can be a Thanksgiving dish, which this year, they were. They are good with any roast, though. At some grocery stores "fingerling" potatoes have been available recently. Arny bought the ones for our Thanksgiving dinner at Costco. A week earlier, I bought some at Whole Foods in Ann Arbor. If the fingerling fad doesn't last, I'll go back to making them with smallish redskins or Yukon Golds.

I roasted the potatoes with olive oil, salt, and peeled garlic cloves in a 9 x 13 inch pan. In another pan, I roasted sweet potatoes (peeled and cut in thirds) with quartered onions and olive oil. I put just enough oil to coat each potato and a little water, and roast them in a single layer (though they can be touching each other).

The temperature can be anything from 350 to 425 degrees, though at higher temps you have to watch them more carefully. The time is flexible, too -- up to around an hour and a half at the lower temperature. And if you are in a hurry you can pre-cook them in a microwave. Just be sure that they are fork-tender.

In sum, you can roast these vegetables with whatever else is in the oven, or as we did, cook them prior to making the too-large turkey. They are good hot or at room temperature. A totally forgiving recipe!

To see what else we ate for Thanksgiving Dinner at Arny and Tracy's, see "Thanksgiving Day" on my story blog.
Posted by Mae Travels at 3:33 PM